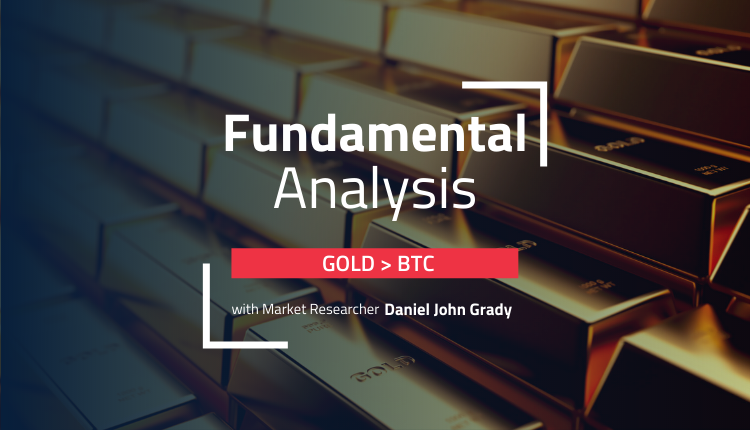 Since the beginning of February, the spot price of gold has been moving higher.

Generally, when the expectation is for interest rates to go up, the price of gold drifts down. But, the concern over a potential invasion of Ukraine by Russia was a stronger factor. With traders piling into gold ahead of time, that explains why the yellow metal didn’t bounce so much when the anticipated invasion actually happened.

Meanwhile, BTC has overall fluctuated in a somewhat sideways pattern. It’s currently higher than it was at the start of February, but it had wider swings than the difference. This is one of the reasons why bitcoin (and cryptos in general) are likely not mature enough to replace gold as a safe haven.

The point of moving to a safe haven asset such as gold, or even treasuries, is to avoid risk.

In markets, the risk is generally high volatility from uncertainty. A war with the potential of nuclear consequences certainly counts as a high-risk situation. Naturally, that means that traders want to have something that isn’t likely to bounce around a lot, to preserve their assets during that period of market uncertainty.

Considering that description, bitcoin in its current state doesn’t seem all that attractive as a hedging investment. The explanation for this is in the kind of trader that bitcoin attracts. Often it’s people who put in risk assets in the hope of getting a better return. It’s not advisable to put your life’s savings into bitcoin, which is an indication that it’s not particularly stable.

The other more long-term issue is inflation. Central banks deliberately undermine flat currencies in order to generate a modest amount of inflation. They do this because the conventional economic theory is that it helps the economy grow.

But now inflation has gotten well out of hand. In fact, 7% or more inflation is worrisome. And traders might be interested in holding gold as a hedge against that.

But buying bitcoin, which regularly fluctuates in the double-digit percentages, doesn’t seem like a good option in the short term. Sure, it can help avoid maybe a 10% loss due to inflation. Nonetheless, if the price of BTC goes down by 50% in the meantime, it’s not a good investment.

It could be that in the long term, BTC might become a mature asset that won’t fluctuate wildly when there is a high-risk situation. For now, however, it appears that gold is likely to remain the winner during a crisis that threatens the markets.

We still have to be careful going all-in on gold. The fundamentals for gold are still pointing to the downside due to inflation likely coming under control from higher interest rates. In turn, that means that gold could be on the rise only as long as the uncertainty around the Ukraine situation persists.

The next round of talks between Russia and Ukraine are scheduled for next week. The longer the situation persists, the more it will “normalize” for the markets. As investors gain more sense of certainty, gold could turn around at some point.