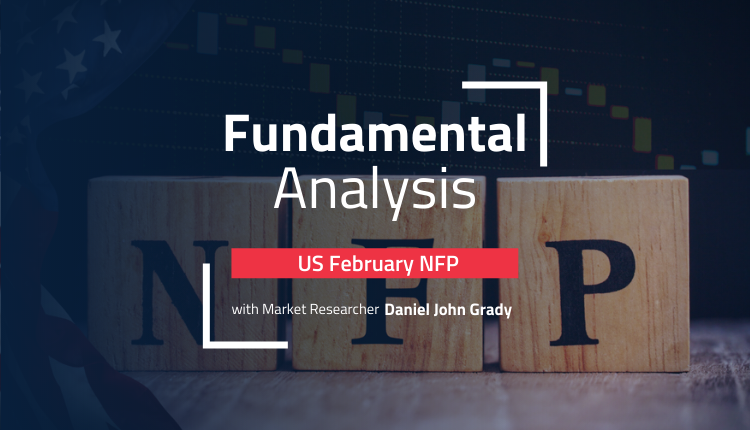 Last month’s NFP figures took everyone by surprise, coming in well above even the most optimistic expectations. It was one of many factors contributing to speculations that the Fed would become increasingly hawkish. That, in turn, helped support the dollar and keep stocks (particularly the Nasdaq) under pressure.

However, things have changed recently.

For most of February, there was quite a lot of talk that the Fed could raise rates by 50 basis points at their upcoming meeting. That would be a “double” rate hike, since typically the Fed moves by 25 basis points. Now that speculation has virtually vanished, 98% of analysts are expecting a “simple” rate hike.

Yesterday, as part of his testimony to Congress, Fed Chairman Powell virtually guaranteed a rate hike at the next meeting. This didn’t shake up the market so much, because that’s what was already expected. The big issue now appears to be what the Fed will do after the next meeting.

NFP could give us some insight into that, as the US economy has generally returned to pre-pandemic activity, although it remains about 5 million jobs less. So far, job creation has been relatively sluggish. That is, in comparison to what would be necessary to recover that number of jobs by the end of the year.

On the other hand, some economists point to changes in the underlying economic structure suggesting that recovering all the jobs wouldn’t be a mandatory requirement.

The consensus among analysts is that there were around 400K jobs created last month, compared to 467K in January. Many of them are expecting a slight reduction, considering February has three days less than January (or about 10% fewer days to hire someone).

In general, substantial jobs growth would give the Fed room to continue policy tightening. However, there is a substantial short-term risk due to the Ukraine situation, as Chairman Powell mentioned yesterday in his testimony. That could likely overshadow the US employment data, as far as a potential market reaction is concerned.

The other factor that could change the market’s outlook for the Fed is the average hourly earnings. These could grow by 5.8%, compared to 5.7% in the prior month. This is still below the inflation rate.

One of the main fears of the Fed is a wage-price cycle that could push inflation significantly higher. With inflation higher than wage growth, there’s less risk. On the other hand, it implies an erosion of consumer purchasing power. And that could be negative for the economy in the long run.

A not so strong dollar?

That could mean that the Fed might be looking to raise rates sharply in the short term, but be much slower to raise rates later. In fact, that would imply lower yields further along the bond curve, which is what usually attracts capital flows.

All that technical jargon basically means that if wages aren’t growing as fast, then the dollar might not get as strong. However, again, that is without considering the flight to safety right now due to the Ukraine crisis.