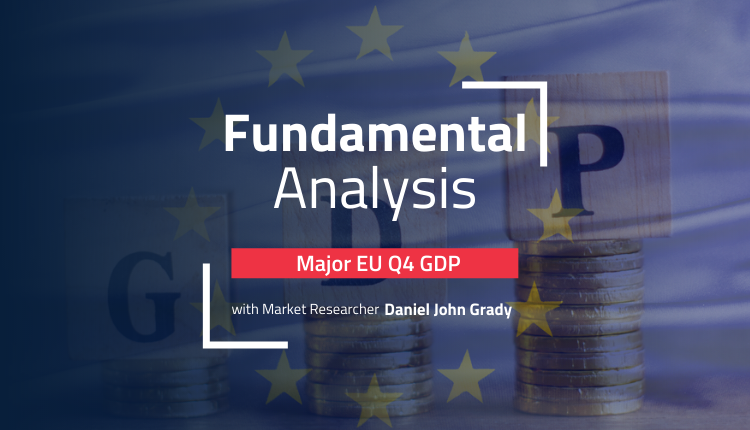 While economists expect the EU to have had good results in their economy last quarter, that probably won’t remain the case for long.

Goldman Sachs expects the eurozone’s economy to grow faster this year than the US economy. But, that doesn’t mean that tomorrow’s data will reflect that. Particularly given the disparate way in which the omicron variant has affected Europe and the US. In the short term, that could imply weakness for the euro.

The Fed could raise rates at their next meeting in March. But the lack of economic growth in the euro area, plus relatively low inflation, implies that the ECB could keep their negative rates for several more months. Although there is talk about bringing quantitative easing to an end in the shared economy, without a lift-off in economic growth, it is less likely.

The threat of omicron didn’t appear until most of last quarter had transpired. But the concern did occur around the pivotal pre-holiday shopping season. At the time, authorities refused to rule out new lockdown measures, which could have had an impact on economic performance.

The eurozone is still below its pre-pandemic GDP level. The markets would interpret a drop in performance as a negative sign since the ECB will already keep rates low for some time. Basically, there is little room for a change in monetary policy outlook that could provide a silver lining to poor economic data.

Generally, the market reacts to the first major EU country to report, and in this case, it’s France. German GDP figures could change the market’s reaction only if it is significantly out of line.

What analysts are expecting

Analysts project France’s Preliminary GDP to show quarterly growth of 0.5%. That is a significant slowing of the pace from the extraordinary growth of 3.0% registered in the third quarter. In fact, some degree of slowdown would have been expected when compared to the summer. If France remains in growth territory, however, it likely will help reassure markets.

Spain is up next to report. There is an expectation to show quarterly GDP growth of 1.4% compared to 2.6% in the prior quarter. Nevertheless, because of significantly worse comparable data in the prior year, annual GDP could show 4.5% growth, compared to 3.4% in the third quarter. We have to remember that last winter, Spain was in a particularly dire economic situation. In turn, this means that they need a larger “rebound” to keep pace with other countries.

Where things are more complicated is in Germany, with quarterly GDP projected to show -0.3% growth, compared to 1.7% in the third quarter. A quarterly contraction opens the possibility that Germany could fall into a technical recession if the current quarter also shows negative. Should the results beat expectations, and Germany reports a positive quarterly GDP growth, it could substantially support the markets. German annual GDP could come in at 1.8% compared to 2.5% in the prior quarter.

EURUSD Does the Flat Formation Continue?