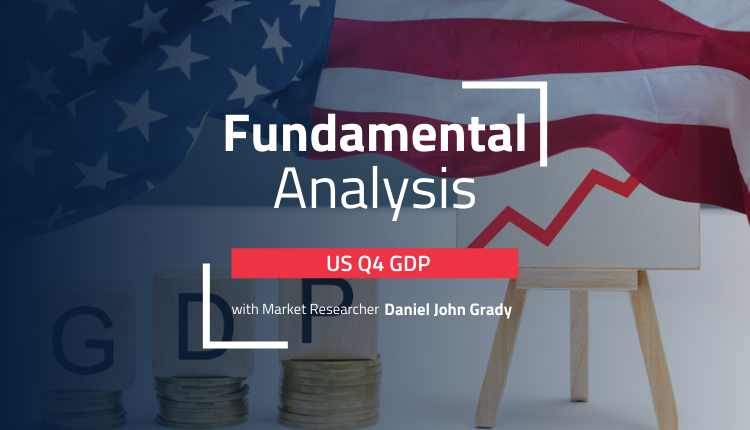 The wave of omicron cases in the US hasn’t prompted further shutdowns. But there has been an increase in the number of workers’ absences.

During the last quarter, there was extensive debate over the potential impact of the Biden Administration’s vaccine mandate. And there was no resolution until that period was over. Despite these uncertainty factors, most analysts think that the US had a good quarter, economically speaking.

While the jobs market hasn’t recovered to pre-pandemic levels yet, America’s GDP completed its bounce back in the middle of last year.

Europe on the other hand still hasn’t completed its return to 2019 GDP levels. That’s not to say that US GDP is fully “recovered”, as there remain a myriad of minor issues, and it’s not at the level it would have been if covid hadn’t happened. In fact, there is still some room for growth.

What we can expect

The consensus among economists is that the US GDP grew at an annual rate of 5.5% last quarter, compared to 2.3% in the third quarter. In relation to other countries, that comes out to around 1.4% quarterly growth. Most notably, this is real growth and takes into account an estimated 6.0% annual inflation rate during the same period.

For sure, that is something the Biden Administration would like to tout. On the other hand, it would support the impression that the economy is sprinting ahead. And that it potentially contributes to higher inflation. A high growth rate gives the Fed more leeway to raise rates.

So, despite being a good figure in general, we could expect that higher GDP figures might impact stocks more. Especially as investors price in a higher chance of more hawkishness from the Fed.

At the same time, we also get Durable Goods Orders. And that data could also shake up the stock market. While the headline GDP figure might be positive, the expectation from economists is that the outlook might not be so bright.

Given the context of omicron, it’s not surprising that businesses would be cutting back on their capital investment. However, if the trend in durable goods persists, particularly in light of higher interest rates, economic growth could stumble in the future.

December Durable Goods orders could drop to -0.5% from 2.5% in November. While at first, this might appear to be a worrying number, if we consider Durable goods Ex Defense, the drop isn’t as dramatic. The expectation is for 1.5% growth, down from 2.0% in prior months.

This suggests that the US government wound down defense spending somewhat dramatically during December. Nonetheless. that’s not a surprising development as the Treasury bumped up against the debt ceiling. Some of that lack of spending could have been postponed to January. In turn, that means lower durable goods spending could just be a brief phenomenon.

Durable Good Orders are generally a barometer of where businesses expect the economy to be in the future, as they are typically investments that take several years to make back their cost. Higher interest rates could also make it more difficult for businesses to finance large capital investments.