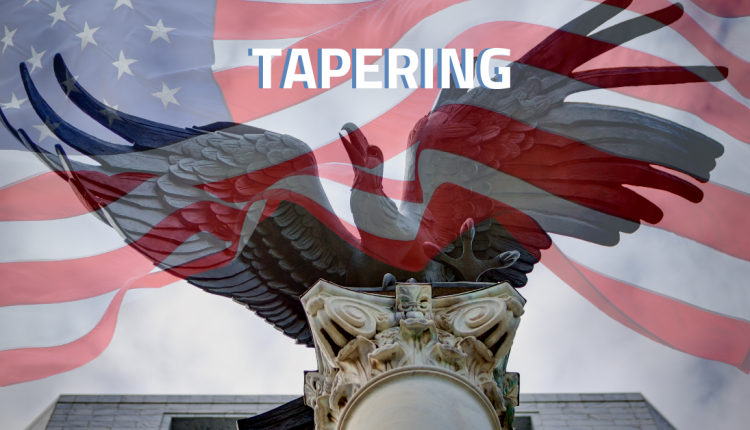 The first time the Fed announced a tapering there was pandemonium in the markets.

This was somewhat ironic because they specifically chose the word ‘taper’ to convey that it was a very minor change in policy.

Since then, the word ‘taper’ has taken on a different meaning in Fed-lingo, because of the potential for a major market impact.

So let’s have a look at what a ‘taper’ is exactly and how it can impact the markets.

This is a relatively new phenomenon among central bank policies, and a few central banks have actually done it.

What happened is that in the wake of the ’08 subprime crisis, normal central bank policy wasn’t enough to fix what was wrong with the markets. Central banks then turned to “quantitative easing”, which is buying up bonds in the open market, with the objective of manipulating interest rates.

At a certain point, the central bank will find it no longer necessary to keep buying bonds, so they will slow down – or ‘taper’ – the number of purchases. They keep buying bonds, but progressively less each month until they stop buying.

Therefore, we can see that the ‘taper’ is a relatively simple concept.

In the case of the Fed particularly, they have a reputation for keeping policy accommodative for an extended period of time.

After that, they start tightening policy, and it’s a one-way street of continually tightening until the next recession. Thus, when the Fed “tightens” policies, it can cause a paradigm shift in the markets.

Before, traders were relying on cheap leverage to buy; then they had to factor in that leverage was going to progressively increase going forward.

As a result, the Fed has to be extremely careful not just in the policy they choose, but how they communicate that policy. That way, they can provide the desired signal to the market, and prevent traders from changing their attitude with regards to risk.

The procedure might be relatively simple, but the process by which the Fed reaches a decision to announce that they will start tapering is very complex.

FOMC members have to take in a wide range of economic data and forecasts with diverse levels of accuracy.

Some of the criteria used are publicly known, such as employment data, inflation, and economic growth. However, some data are unknown, and analysts have to guess what each member is feeling before the meeting.

What the Fed has found out is that by “easing” the market into the idea that a taper is coming, it helps soften the reaction. They tried this again in 2017 when the Fed decided to start rolling off some of its balance sheet. Thus, they effectively “sold” bonds instead of buying them.

Two months before they were set to start the policy, they gave clear hints that it was coming.

This gave analysts and traders two months to adjust their strategies, and the Fed apparently was quite happy with the result.

That’s why most analysts believe that when the Fed has to taper in the future, they will give at least two months ‘warning’ that it’s coming. Then it’s just a matter of figuring out by how much the Fed will reduce its buying program.

The Week Ahead – The Show Must Go On Despite Outbreaks