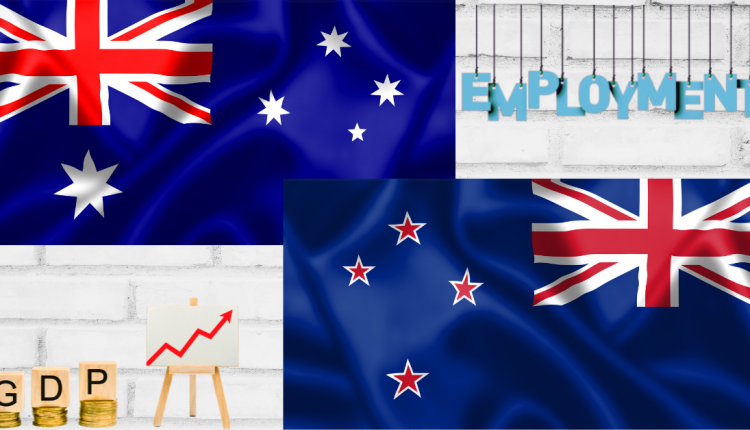 Generally, Australia and New Zealand’s currencies move almost in lock-step. This is thanks to the large amount of trade between them and their general similarity.

But so far this month, their currencies have diverged by almost 2%. That’s not a lot by most currency standards, but for these two, in particular, it isn’t exactly normal.

So, what’s going on? Is this reflected in other trends? What does the data say?

Although both countries have had a similar trajectory in the impact of covid, Australia has had a harder time getting it under control.

Moreover, even though both countries saw major lockdowns, Australia’s were more frequent and had a larger economic impact. This is somewhat understandable since Australia is a bigger country with more population centers.

But now that the key for recovery is in the vaccine rollout, Australia has been falling significantly behind.

Their vaccine rollout has been hit by import restrictions from Europe and other political wranglings, leaving it at half the rate it was planned at this point.

By contrast, the smaller New Zealand is practically bang-on-plan to get the population vaccinated by September. Australia was also targeting September, but it’s becoming increasingly evident that goal will not be met. In fact, this might threaten the reopened ‘travel bubble’ between the countries going into the critical summer travel season.

Tourism accounts for 9.3% of New Zealand’s economy and a fifth of the country’s foreign income. Or, it did before covid brought it to a screeching halt.

New Zealand is scrambling to get ready for open borders by the start of the next season in October. This is because another season of no travelers would likely devastate the country’s second-largest industry.

By contrast, Australia’s primary export is raw materials to China.

The Asian giant has been expressing increasing concern that prices are getting out of hand, and Australia’s largest export – iron ore – might have finally reached a ceiling. Although coal prices remain high, it’s not useful if they can’t be exported.

Nevertheless, there is a general idea of a new commodity cycle, where prices might have already hit their peak. At least until there is more certainty about the economic recovery and how much inflation we’ll see in the dollar.

So, it’s possible that investors see a potential upside for New Zealand, while Australia might have a couple of semesters of slower growth. Indeed, we might see a stronger appreciation in the Kiwi than the Aussie over the coming months.

First up to report tomorrow is New Zealand’s Q1 GDP, which is projected to come in at 0.9% annual growth compared to -0.9% in the final quarter of last year.

We have to remember that the last quarter saw a rise in covid cases across the world, but by the first quarter, there was general relief that a vaccine had been found. The demand for imports from China increased, and New Zealand was able to restart some travel from Australia.

Across the Tasman Sea, however, experts anticipate Australia’s unemployment rate to remain stable at 5.5%, despite the expectation of the Employment Change showing a net addition of 30K jobs. That compares to -30.6K lost in the prior month.

This would be a rather decent result in normal times, but not during an expected recovery.

AAPL Minor Impulse To Complete Near 110.04