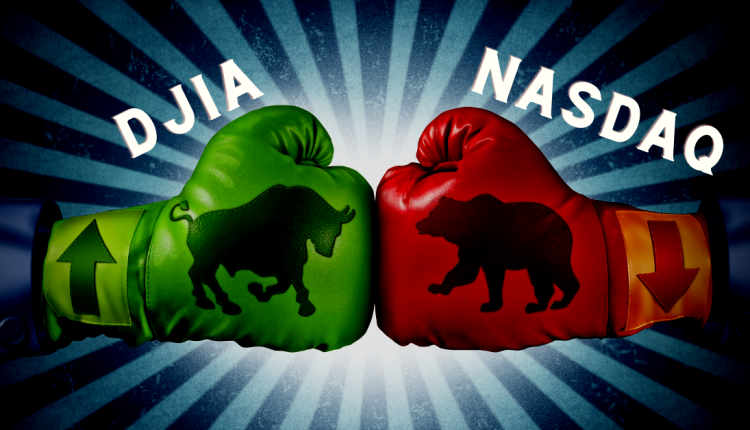 Since the beginning of the month, tech stocks have been taking a hammering.

Notorious growth stockholder ARK Investments has seen their portfolio drop below $20B, dragged down by Tesla which has lost over 12% in share price over the last couple of weeks.

The Nasdaq, with its high weighting in tech, has been the worst performer. Meanwhile, the DJIA moves higher.

Now, of course, it would be easy to point back to the several months in which we’ve been talking about the impending shift away from fast-growing, pandemic impervious tech stocks. But a couple of weeks of price movement doesn’t necessarily mean there is a full-on switch happening.

We want to keep a careful eye on the trends to see if this is just a hiccup or whether we will see a continuation of the current market dynamics.

There are good arguments on both sides

A natural pivot towards growth stocks was to be expected as the economy reopened. But there have been a few factors that might have accelerated the process recently.

Most are focusing on the Fed, and the potential for a taper. However, it’s unlikely the Fed will announce anything in that regard until the Jackson Hole Symposium in late August at the very earliest. The consensus among economists isn’t until the fourth quarter of this year.

While it’s likely that investors try to position themselves a little in advance, perhaps another explanation for a move away from higher-risk growth stocks is the recent political push to raise capital gains taxes.

The thing about capital gains is that you have to pay it when you make money. However, you don’t get anything back if you lose. So, it’s a significant damper on risk.

Has the rebound already happened?

The latest jobs number was a bit of a shock for the market, though there had been some warning signs leading up to it.

Most states have already practically lifted most major restrictions related to covid, meaning that most of the economy should be normalizing. Yet unemployment went up.

Growth stocks typically rely on the expectation of a booming economy in the future to justify taking the risk.

While a large amount of stimulus is billed to boost the economy, in the end, it has to be paid for. The potential of higher taxes and inflation would be expected to drag on the economy.

Furthermore, the largest beneficiaries of any potential further stimulus, like with the Infrastructure Bill, are likely to be value stocks, such as Caterpillar, GE, Intel, and Honeywell.

One of the ways to keep track of the evolution of the growth vs value balance is tracking the comparison between IWF and IWD.

These are ETFs that are based on the Russell 1000 value index (IWD) and the Russell 1000 growth index (IWF). Keeping an eye on a daily chart of IWF/IWD can give some insight into the market’s risk appetite as well.

The trend has been on the downside, not just this month, but all the way since November. Which is when the first vaccines were announced.

Although risk appetite has managed to return to growth, typically it’s based on the hope that the Fed will push forward its taper. But with everyone talking about the potential of inflation, that seems increasingly unlikely.