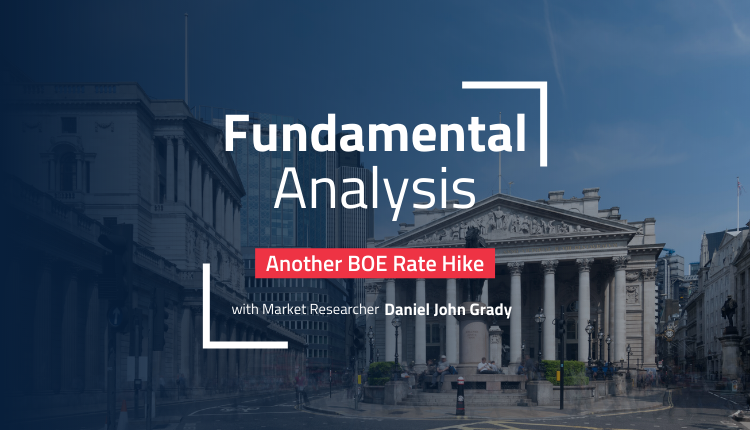 The market is expecting a 25 bps hike by the BOE tomorrow and has already priced it in. That means it’s unlikely that the rate hike itself will cause a major shake-up to sterling pairs.

However, the commentary around it, and in particular the vote, could shock the market. Here’s what you need to look out for to get a better understanding of what could happen.

Between a rock and a hard place

Governor Bailey succinctly summed up the BOE’s problem: it has to walk a “very tight line” between fighting inflation and not causing a recession. Higher rates might tamp down inflation, but the increased cost of capital makes a recession more likely. In turn, this implies the Bank will be cautious in its monetary policy progress.

So far, it has raised rates three times in a row, a historic first. The markets view this harsh tightening as worrying, which is why the pound is underperforming despite higher interest rates. The weaker pound also makes it harder for the BOE to fight inflation since it raises the cost of imports.

Time for a breather?

These factors have led a few analysts to wonder when the BOE will take a pause in its tightening cycle to review the effects of policy so far.

And after this meeting, it might be a good time for that. After all, the BOE itself expects inflation to peak in June, and then moderate throughout the rest of the year. That could, ironically, actually make the pound stronger, as investors would be less worried that an aggressive hiking path is ahead.

The market is currently pricing in five more hikes this year, after tomorrow’s meeting. But it seems the BOE doesn’t agree and wants to signal to traders that the policy won’t be as aggressive. This is in the context of lowering the expectation of higher capital costs and supporting the economy.

One of the ways the BOE could communicate that the market is pricing in too many hikes is to change the language in the statement, reducing the likelihood of more “modest” hikes in the future. Or they could also update the guidance for inflation, to expect it lower than currently. Or even lower the BOE’s growth outlook.

But the “big guns” that could convince the market that another rate hike won’t happen at the next meeting is a change in the vote. Last time, it was 8-to-1 in favor of raising rates. If more members join Cunliffe in voting against a rate hike, it could be a sign that the mood is shifting towards taking a pause in rate hikes.

A bit of softening from the BOE could, counterintuitively, end up supporting the pound. Even if the Fed hikes by the 50 basis points expected later, the pound would still have an interest rate spread in its favor.

Now whether that’s enough to overcome investors’ worries that the UK is headed for a slowdown in the latter part of the year, is a different question.