US Q1 (Preliminary) GDP and What It Means for the Fed 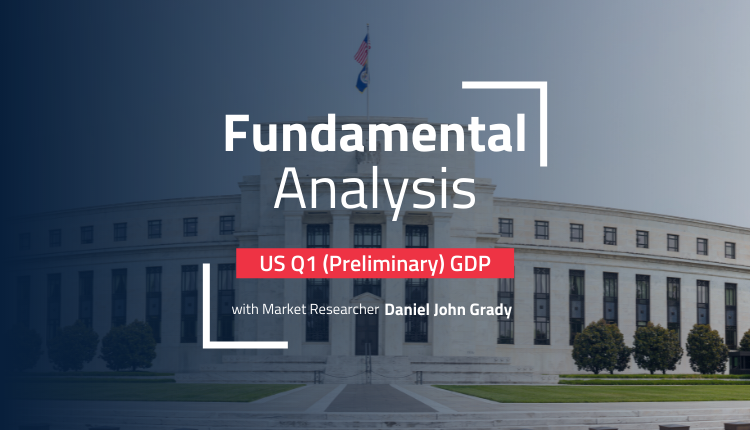 Perhaps one of the most important releases of data points this week is the first look at the US GDP for the last quarter. The expectation is for it to be a key metric.

This will not only evaluate the underlying health of the US economy, but it will also have important implications for next week’s FOMC meeting. There is a near-unanimous consensus that the Fed will hike rates by at least 50 basis points.

But factoring in the economy’s growth and the potential implications for monetary policy could have an important impact on what the Fed ultimately decides to do.

Higher rates will squeeze the economy. A little bit of squeeze is a desirable outcome to contain inflation. And it will meet the Fed’s mandate for currency stability. But if the economy isn’t growing much, a little bit of a squeeze could negatively affect and erode the gains in the labor market. That would be contrary to the Fed’s second mandate to ensure full employment.

There are two bits of data coming out. Firstly, there’s the GDP headline number and the GDP price index. With inflation very much the focus, the price index for the whole economy could have an outsized impact. That said, it could be just as important as the growth rate.

Analysts project US Q1 GDP growth to significantly slow down to an annual rate of 1.1%, in comparison to 6.9% in the fourth quarter of last year.

Note that the US is different in its reporting on GDP, in that it has an annual rate instead of a quarterly rate that most other countries do. There is a more complex formula to calculate it, but a simple, rough way to compare the result with other countries is to divide it by four. In other words, the estimate is for the US GDP to have grown around 0.3% in the first quarter.

What it all means

In terms of prices, they could continue to reflect increasing inflation at 7.3% compared to 7.1% in the prior quarter. What this means, as a gross simplification, is that even as the economy is growing in nominal terms, the real growth rate is slower because inflation is eroding the value.

But if inflation is too high, it can undermine consumers’ purchasing ability. This has been the case with the US recently, with inflation growing faster than average wages, as Americans are seeing real deterioration in their purchasing power.

In turn, this could translate into slower economic growth. If there is a significant deceleration in the US economy, following higher inflation after the latest covid wave, it could be a sign that inflation is becoming a serious problem. In response, investors could be looking to hold back investments out of concern over future growth.

In terms of monetary policy, slower growth can reduce the Fed’s ability to take action. Powell has said the objective is to set policy at a “neutral” level. But that level is not fixed and depends on growth. With slower growth, the “neutral” level is likely to be lower, meaning the Fed could be more reluctant to raise rates.

In other words, a disappointment in the GDP growth might actually support the stock market, and weigh on the dollar.