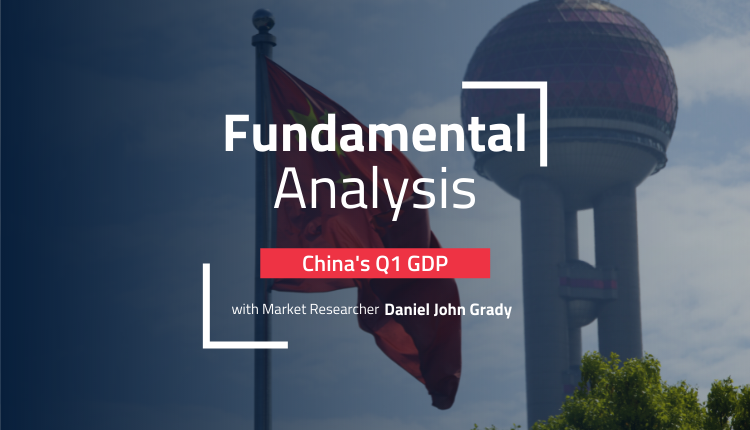 Last Monday, China reported annualized Q1 GDP growth at 4.8%, above expectations of 4.4%. Normally, that would be expected to give a positive boost to Chinese assets. After all, better than expected economic activity should be good for Chinese firms, right?

This is especially curious, given that also on Monday, the PBOC lowered the RRR by less than expected. Note that lowering the RRR is the Chinese equivalent of easing. So, the central bank is being less dovish than expected, the economy is doing good, then why is the currency weakening? And what does this imply for China’s main trade partners?

The official yuan rate is set at a range. This is the “onshore” rate; the “offshore” rate is free-float and reflects where traders think the currency is going. Analysts track the “spread” between these two, as it shows the separation between official poly and the market.

Recently, the spread has been widening, suggesting that the yuan continues to weaken faster than the loosening that regulatory authorities are allowing.

One of the ways of understanding the issue is expectations. Q1 GDP data is mostly from the time before China was facing rolling shutdowns due to the spread of Omicron.

Initially, there was optimism that China would be able to nip the spread in the bud as they had done with the initial wave. But Omicron is significantly more contagious, and even though Chinese official data shows a very small number of cases, the number isn’t going down. It’s, in fact, increasing, meaning the “wave” is far from over.

Differences are the key

President Xi recently vowed to keep up the “Zero Covid” policy behind the targeted lockdowns. Meaning that China is unlikely to follow other major countries that have been putting the pandemic behind them. Those countries have been facing significant inflationary pressures leading to their central banks raising rates.

Meanwhile, covid rules in Chinese ports like Ningbo, Shanghai, and Shenzhen have caused an unprecedented backlog of ships waiting offshore to unload and take on cargo.

Just as the world looked to be getting back on track with supply chains, covid is once again throwing a wrench into the works. This could be one of the explanations for China’s drop in imports recently; it’s not that Chinese firms aren’t looking to buy, it’s that their cargo is still waiting to enter port.

Although, this doesn’t appear to be as big of a problem with bulk carriers, such as coal and iron ore from Australia. After an initial drop in March, exports from Port Hedland jumped 18.4% month over month. Containerized freight from New Zealand and Japan, however, seem to be more at risk.

Chinese authorities have vowed to keep logistics going “smoothly”. But as long as covid cases keep rising, or the central government doesn’t change policy, Chinese consumers could face difficulties. Let’s not forget this comes on the back of the housing crisis. Contracted sales from major Chinese building firms remain down by double-digit percentage points compared to the prior year.

The weaker yen erodes Chinese purchasing power of foreign goods, while Chinese consumers appear to be less willing to spend ahead of the uncertainty around covid.