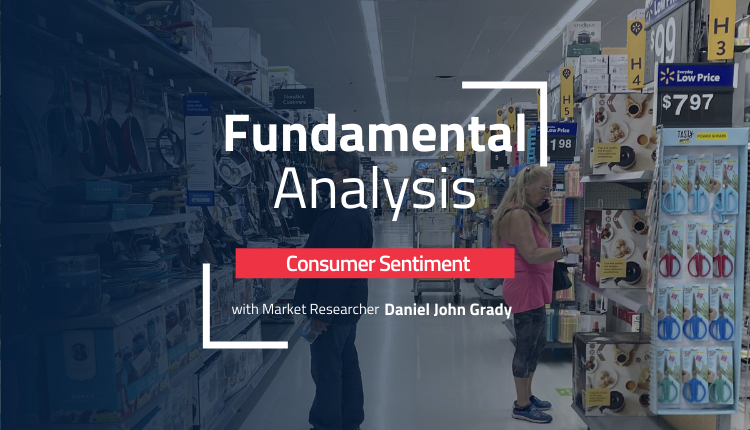 Last week a survey conducted by I&I/TIPP showed that American confidence in the economy was at the worst levels recorded. It’s not the worst ever, because economic optimism in the US matched the level it was at in 2008. This was the worst moment of the financial crisis.

78% of Americans reported that their economic situation hadn’t improved in the last 12 months. But what’s more concerning, is the outlook.

Yesterday, a Grinnel College poll showed that 58% of Americans believe they will be worse off economically a year from now. A further 15% said they expected to be the same. Taken together, these two polls affirm a notion that US consumers are starting to shy away from the market.

On the one hand, if consumers are less willing to spend, then potentially it could finally start to impact inflation. After all, demand is one of the drivers for increasing prices. Of course, demand doesn’t have as much impact on rising prices due to increased transportation costs from logistics issues. But it could still help the Fed’s mission of stabilizing the currency.

The bad news is that lower consumer spending also translates into less economic activity. Pundits can argue over what it means for electoral results that the Biden Administration has the worst economic rating since Jimmy Carter according to a CNN poll. But traders might want to be concerned that the US economic engine is flagging even as it is still in recovery mode. Expected further monetary tightening and high inflation are also likely to keep the economy under pressure.

And the data points?

Tomorrow, we have the release of the University of Michigan Consumer Sentiment number, and the expectations are not so good. US consumer sentiment has been falling for almost a year now, and is well below the worst moments of the pandemic.

Headline March Consumer Sentiment is expected to fall to 59.7 from 62.8 prior, the worst result in years. While the focus is usually on the Sentiment number, some of the components could give us some additional insights. The inflation expectations survey anticipates showing that consumers expect inflation to be at 5.4% this year, up from 4.9% prior.

The theory is that if consumers believe their money will be worth less in the future, they will go out and spend it now. However, going back to the I&I/TPP poll, just 22% of Americans have over 3 months of savings, meaning that there is little in terms of disposable cash that inflation could motivate people to spend.

The erosion of disposable income that occurs when inflation is higher than wage increases can continue to depress consumers. Even though spending might increase in nominal value, the real value when adjusted for inflation might fall. If consumers get too concerned about prices, they are likely to focus more on finding stores of value than spending on the kinds of goods that support the economy.