The Week Ahead – Markets Grapple With Monetary and Geopolitical Headlines 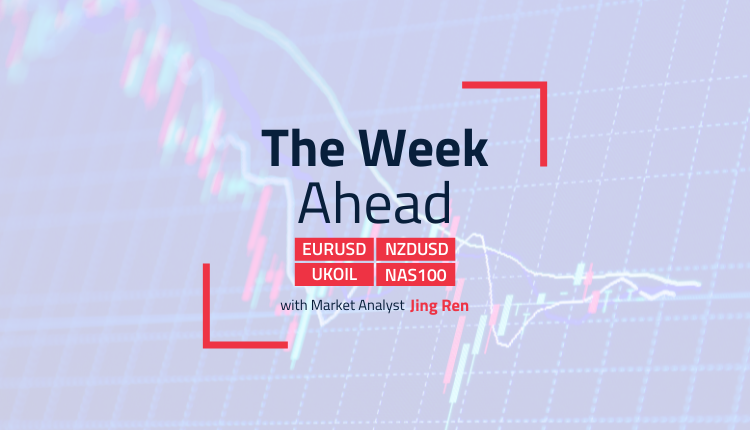 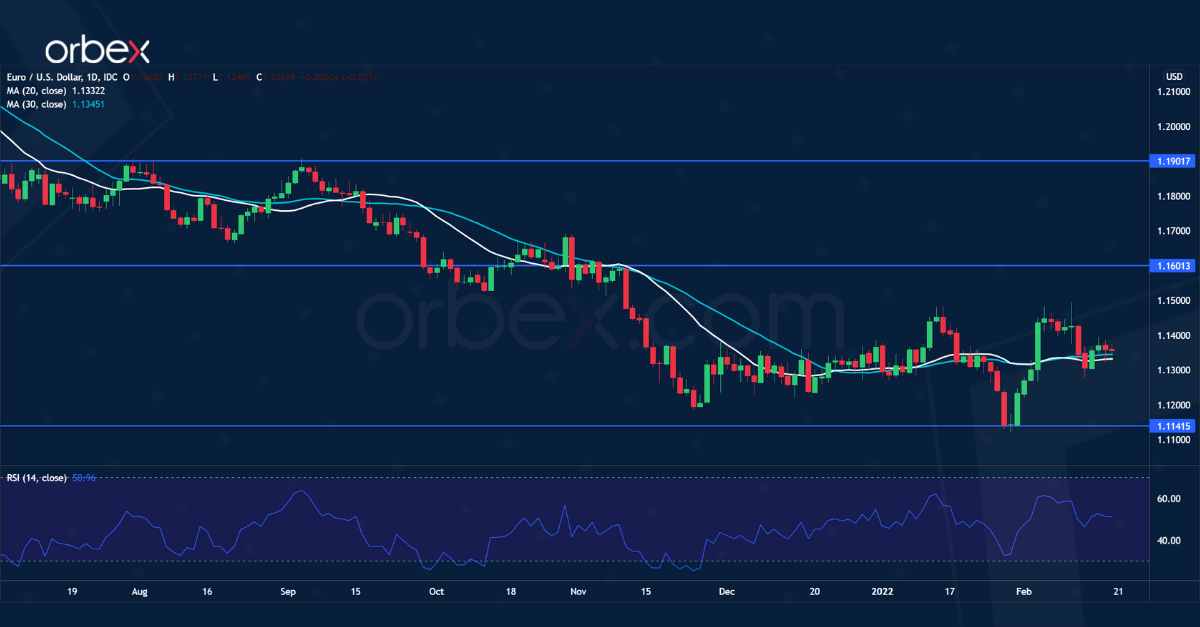 The US dollar steadies as bullish catalysts fade. Contrary to the market’s belief, the US Fed may not push interest rates flat out.

The January meeting minutes suggest that hikes could still be data-dependent and happen on a meeting-by-meeting basis. This might lower the probability of a 50 bps hike at the March meeting. In turn, this would temper the dollar bulls’ enthusiasm in the process.

As an increasingly hawkish ECB is expected to catch up with monetary tightening, traders may shift their focus back to the single currency and play the narrowing divergence trade. 1.1600 is the hurdle ahead and 1.1140 remains a major support. 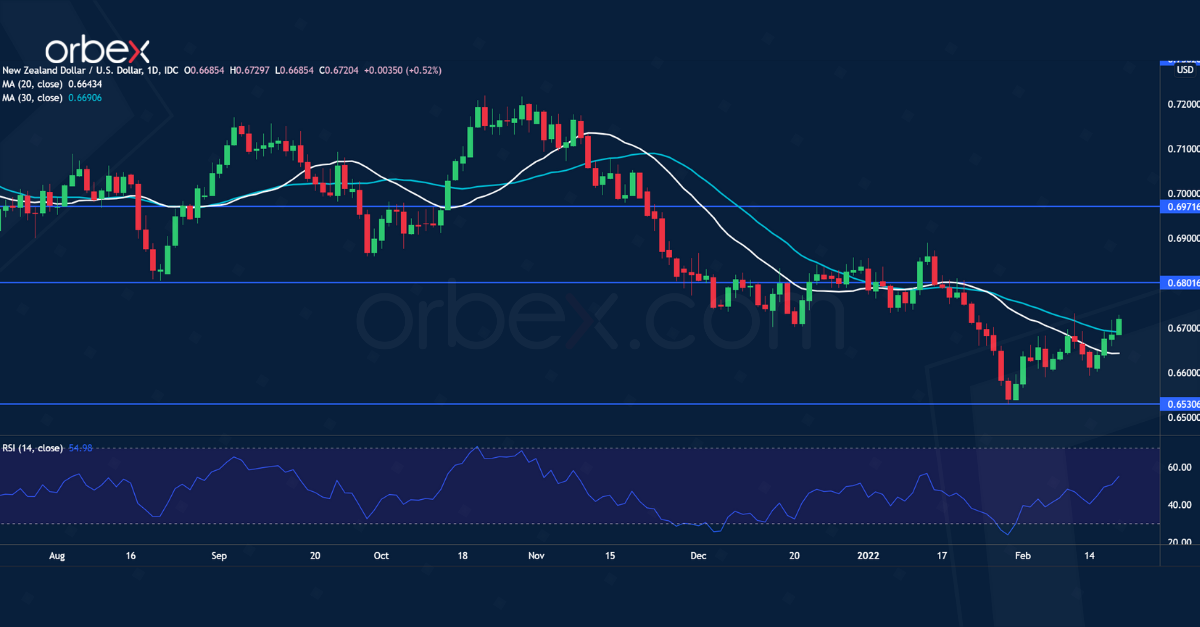 The New Zealand dollar bounces back over rate hike expectations. Tensions on the Ukraine-Russia border previously heightened risk aversion. And the also took a toll on the sensitive kiwi.

Traders have now turned their attention to the fundamentals ahead of the central bank meeting. In order to reign in persistent inflation and soaring housing prices, the Reserve Bank of New Zealand may tighten aggressively with six hikes this year.

The market has priced in a 25-bps rate increase in the upcoming decision. A 50-bps scenario would further boost demand for the kiwi. 0.6800 is the first resistance and 0.6530 is a critical floor. 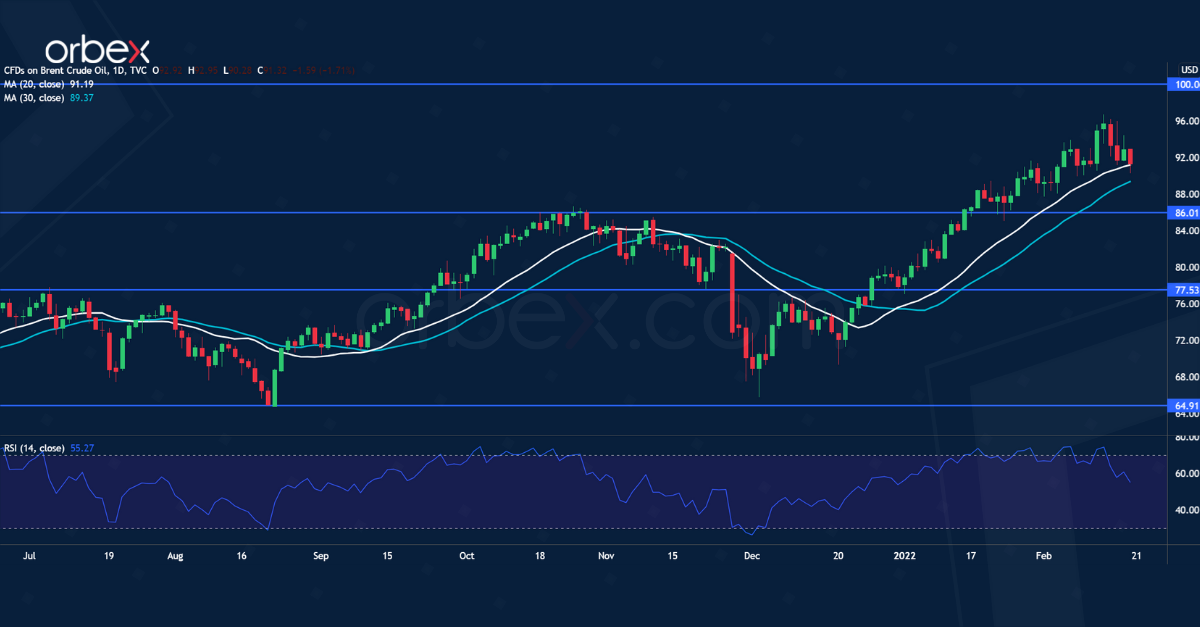 Oil prices remain well supported by geopolitical risks in Ukraine. Volatility reflects conflicting statements on the withdrawal of Russian troops and ambiguity in regards to the next development.

Exchanges of threats from both sides (from Western sanctions to Russia cutting energy supplies) add even more pressure on a tight global market. A bear case may come from the resurrection of Iran’s nuclear talks.

Any signs that parties are close to an agreement, thus opening up Iranian oil exports, could weigh on prices. Brent crude is now a stone’s throw away from the 100.00 mark. 86.00 is the closest support in case of a fallback.

US 100 weakens as market de-risks 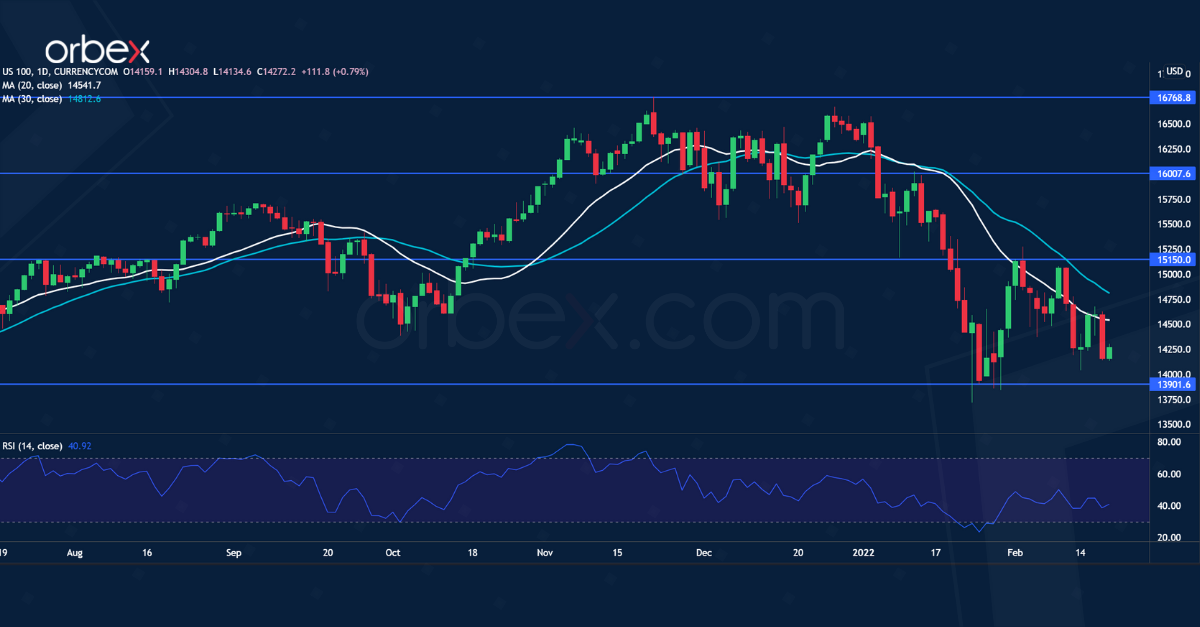 Risk aversion is taking over as the Fed tightening continues to weigh on rate-sensitive stocks. The main concern on Wall Street is a too aggressive move by the central bank after several Fed officials called for a faster pace of interest rate hikes.

Meanwhile, the ebb and flow of diplomacy over Ukraine keep market participants on their toes. As the sword of Damocles hangs over Europe, investors flew to safety and shifted to bonds and gold.

A drop below 13900 could spark a deeper correction. 15150 is the first resistance ahead.