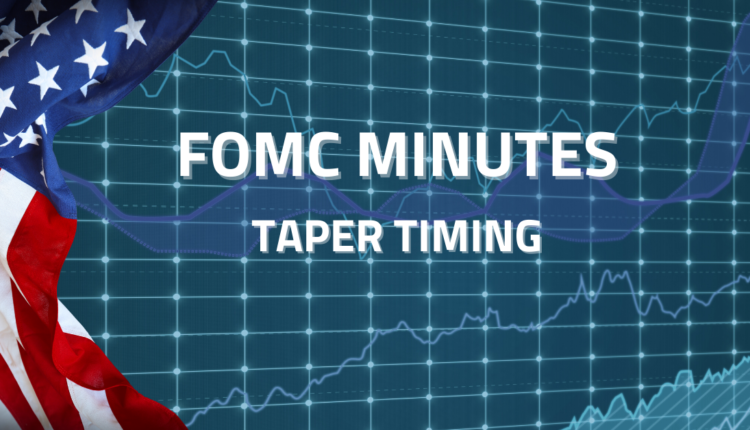 After the unexpectedly disappointing results in jobs creation reported on Friday, there is a lot more interest in the FOMC minutes’ release tomorrow. What the markets are looking at now is when the taper will happen.

After the last meeting, the Fed said they would start tapering “soon”, but didn’t give a definitive date. The factor that is most likely going to affect bond yields now is when they actually reduce their asset purchases. In turn, that would affect how the dollar performs against other currencies and even the stock market.

What are the clues?

Analysts hope to be able to hone in on a date based on the reasons that different members give for supporting the start of the taper.

Essentially, this gives us the criteria that the Fed is using to decide when to change their policy. Then we can compare that to the data as it comes in.

The big issue is likely to be expectations around employment, given the Fed’s dual mandate and what we’ve seen in employment so far.

The current consensus is that the Fed will start tapering after the November meeting. This is based on an assumption that the Fed would let the markets know the taper is coming two months in advance, and November is two months after their announcement.

The issue with the NFP data was that it was generally touted as good news by officials since the unemployment rate dropped by one decimal. On the other hand, the number of jobs created was below even the most pessimistic outlooks.

So, we want to see whether the Fed cares more about the unemployment rate or raw jobs creation numbers.

In previous instances, FOMC members have said that the Fed cares more about the employment to population ratio, more so than either NFP or the official unemployment rate.

The employment-population ratio was at 58.6% the last time the Fed started their taper following the 2008 crisis. Now, it’s back to 58.7% and it has been climbing steadily since the covid recession officially ended.

So, what kind of reaction can we expect?

The thing is, it’s unlikely that anything in the minutes will move forward expectations for when the Fed will start its taper.

November is already the “earliest” estimate. Therefore, it’s hard for the market to take a more hawkish understanding of the minutes than they currently do, at least regarding the taper.

What might spook investors is any mention about raising rates sooner than expected.

The current prediction for the taper is to end in the second quarter of next year. And the Fed will be raising rates for the first time in the third quarter.

The market could interpret a potential hint that rates could rise before then as hawkish. For example, if there was commentary about how it wasn’t necessary to finish the taper before raising rates.