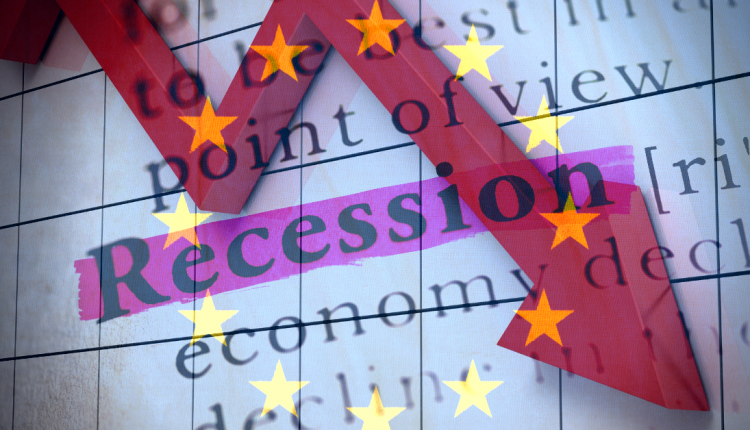 Last October, EuroZone economic activity was reported to have exceeded expectations. In fact, it pulled the shared economy technically out of a recession.

Technically, because compared to the prior year, the economy was 4.4% smaller. And even as the report came out, European countries were announcing another round of lockdowns as covid cases spiked.

Given that most of the Euro Area was under some kind of lockdown for most of the quarter, it’s not surprising that virtually all analysts are expecting another contraction to be reported tomorrow.

The question is just how bad will it be.

One quarter of negative growth isn’t enough for a recession.

However, given the difficulties to distribute vaccines, and the still high covid case numbers, we aren’t exactly expecting relaxations of the lockdowns which led to last quarter’s (expected) negative growth.

Some official institutions have published more optimistic numbers. But still, there is a pretty strong consensus among economists that the current quarter will also show negative growth.

The euro area will once again officially be in recession. This brings the total to five quarters of annualized negative growth.

That has some important implications for monetary policy because, officially, the ECB still expects positive growth in the fourth quarter.

(Though we should note that VP de Guindos said that Q4 GDP is likely to be negative and not meet the bank’s expectations).

Presumably, they will be under more pressure to help the economy. This is because many official projections of economic growth will have to face adjustments.

And the Euro Strength?

A lack of growth might ironically be helping the euro against its currency pairs.

A consensus among central banks has settled in that negative rates aren’t as effective as initially thought. So, there is virtually no expectation that the ECB will cut rates.

On the other hand, if the economy is not surging, then there is less expectation of inflation than in other countries such as the UK and the US.

Additionally, recently the ECB downplayed concerns about the rising euro.

Initially, it was Chief Economist Haldane who brought up the potential that the ECB could be concerned about a stronger currency, as it would affect their policy.

Over the last week, a slew of speakers (including Rehn, Makhlouf, and Knot) had come out suggesting that the market was underestimating the willingness of the bank to cut rates.

The somewhat contradictory signals fall into a pattern of the ECB struggling to properly convey its message. Notably, neither de Guindos nor Lagarde have yet commented on the exchange rate recently.

The consensus of expectations is for the euro area’s economy to have contracted during Q4 by -1.8% compared to +12.5% growth prior.

Expectations are for annualized GDP to show a contraction of -6.0% compared to -4.3% in the prior reading.

A substantial contraction in Q4 will likely force the ECB to take more action than just trying to talk down the euro.

The consensus is for more asset purchasing. But if the euro area were to miraculously avoid contracting, it could send the markets higher and strengthen the euro.

So much so that it might force the ECB to do something beyond trying to talk down the euro.