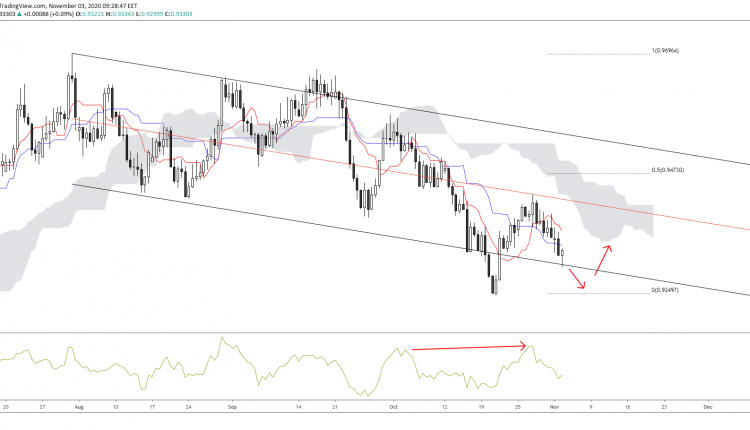 Bias now turns to the downside as a recent attempt at the back end of last month saw levels dip to the mid 0.92 range. However, a brief rally to the median regression saw a pullback to the lower channel. We now look ahead to another test at the recent low, and support at the lower channel.

The hidden divergence on the momentum indicator hints at prices falling further. A potential bounce at the low of the 0.9696/0.9249 downside Fibonacci leg could lead to another attempt towards the lower border of the Ichimoku cloud.

This would then open the door for another move to the mean.

A look at the 4-hour chart shows that prices are hanging on to the cloud, which could lead to engulfment in the short-term.

Support is evident at the lower channel, with prices heading that way ever since the bearish divergence was noted on the momentum indicator.

The next clue to another attempt at the median regression will be if prices can begin trading again between the base and convergence lines. Should this scenario play out, then a move to the 0.94 region could be likely.