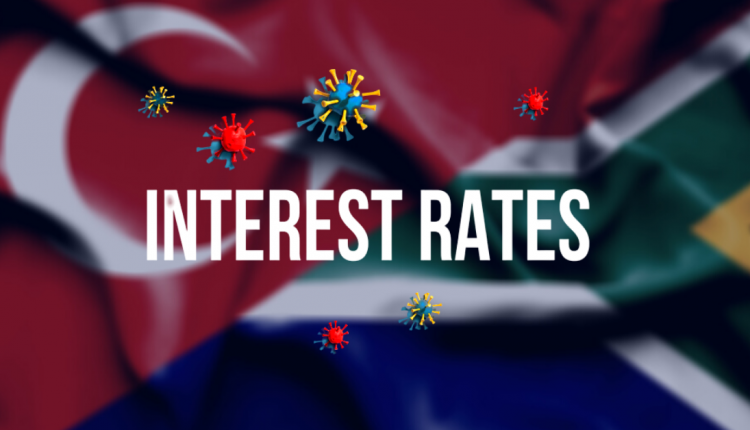 Traditionally, at this point in the economic cycle, emerging markets should be an appetizing currency play.

As risk appetite returns to markets, we would expect emerging market currencies to strengthen as capital starts searching for yield.

But the coronavirus situation is different. This is because many emerging countries saw their case numbers increase after the developed world.

Some are still far from peaking and might have months before they expect a recovery. That’s the case with South Africa, which is hoped to have peaked in cases last week.

Turkey’s spike in cases happened about a month after Europe, and has more or less constantly been reporting around a thousand new cases a day since late May.

Although Turkey announced in late June it was open for tourism, recovery in Turkey is expected to track behind Europe.

What Are the Central Banks Up To?

The TCMB has used the pandemic to get a firmer grasp on the currency, keeping the exchange rate to the dollar bolted just above the TRY6.80 handle since the end of May.

It’s been at a great expense of their reserves, which has led to substantial criticism from outside observers.

In the meantime, the central bank embarked on a crash cutting program erasing all the increases of 2018. In practical terms, Turkey has the lowest rates in the world, when considering them in the context of inflation.

Considering last month’s inflation rate of 12.6%, the effective interest rate in Turkey is -4.37%.

The TCMB is projected to leave rates at 8.25% at the next meeting. Given their iron grip on the currency, we are not expecting much volatility in the exchange rate as a result of the decision.

The latest survey of economists shows that they believe the rate will be at around 8.00% by the end of the year.

In practical terms, keeping the rate steady would amount to a rate hike if the projection of inflation dropping back to 7.0% is realized.

South Africa Outlook Still Up in the Air

There doesn’t seem to be a glimmer at the end of the pandemic tunnel for South Africa.

This means that further easing is the theme for now, even if rates are at decades lows. Inflation is also at a decade low, which gives the central bank more room to cut.

That said, there isn’t a consensus among analysts about whether there will be a cut of 25 basis points or not. This could take the market even more by surprise since the SARB doesn’t have a fixed time for release. It usually springs it on traders about a half an hour into the press conference.

There is a slight inclination towards a cut among analysts, but it’s by a slim majority. In the event there isn’t a rate cut, the bank is expected to be as dovish as possible.

Where there is agreement among economists is that the SARB will likely keep their bond-buying program as is.