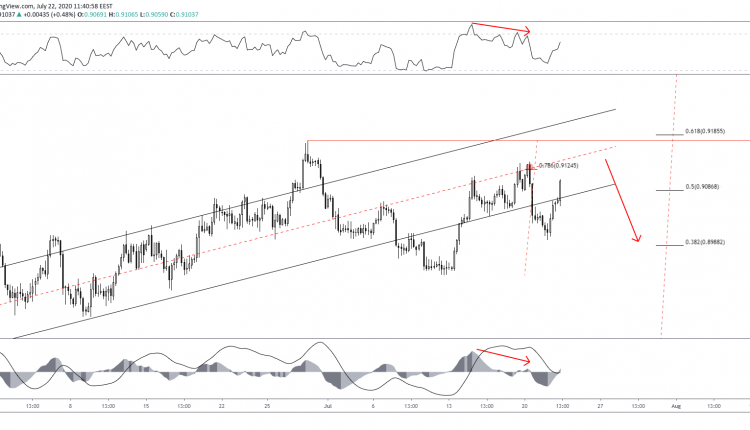 Since it reached the June high of 0.9176, the pair has slid as sellers stepped in in a premature attempt to avert further buying beyond the golden ratio at 0.9185.

With bears pushing prices below the 0.8670-0.8814 channel, a fresh low was formed at 0.8935. However, bulls saw an opportunity to buy there, sending prices back within the regression channel.

Despite rising, a test at the median regression line suggests that the bearish move is likely to continue. The test occurred at the 78.6% Fibonacci retracement of the 0.9185-0.8935 leg, making the level a critical component to the short-term outlook. In addition, it formed a valid divergence, supporting shorts.

The 2h chart above indicates that prices now trade within a descending regression channel.

With the top at 0.9124 holding firm, the chances of a bearish continuation will increase. The short-term RSI (14) supports this narrative. But we do expect the upside to be invalidated only on a break of the 0.9176 high.

That said, we anticipate a potential test of the median regression in a stronger-than-expected upside attempt next. Should it fail to trigger shorts, we will shift focus on the market top.

Bears will target the 0.8998 low after a successful reversal before reaching the market top. However, this will require a break below the long-term regression channel first.

A break of the 38.2% Fibonacci retracement is expected to increase short bets to fresh lows below 0.89.

Trump: Pandemic Will “Get Worse Before it Gets Better” – USD Reacts