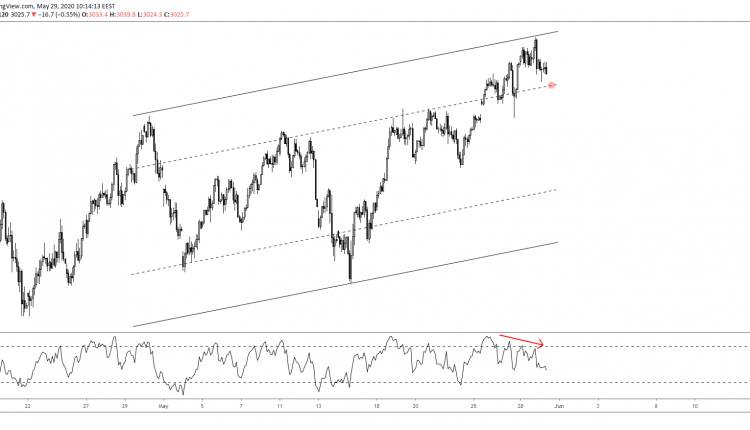 Despite the short/medium-term ascending channel indicating the SP500 remains biased to the upside, the divergence on the RSI (9) could be offering a short-term sell.

The regression channel suggests that the first attempt won’t even make it down to the 3000 round support. It shows that the index is likely to weaken to 3010 before additional clues can be provided.

In the short-term, the ascending channel indicates that bears have already made an attempt to push lower.

However, this failed and triggered another move to fresh highs. The index has not traded above the regression line since the 2907 low though.

With the RSI (9) supporting bears in the short-term too, we could see bears going for another attempt. Usually, the second attempt, or each attempt for that matter, is stronger than its preceding.

If we see bears breaking the channel, we can expect a move down to the regression line. This can offer a  pullback and a continuation, or an immediate continuation down.

The 3010 support break will open up more room for 2980, 2955, and then the 50% Fibonacci at 2918. There, further clues will assist in identifying whether this will continue lower down, or move back up.