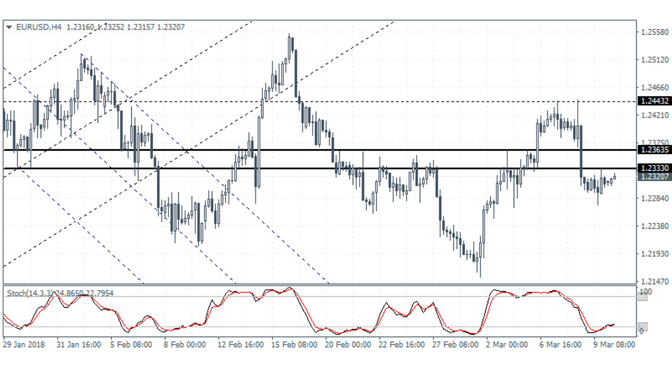 Friday’s nonfarm payrolls showed a solid pace of job creation with the U.S. economy seen adding 313k jobs which beat estimates by a strong margin. However, the U.S. unemployment rate was unchanged at 4.1% which missed estimates of a decline to 4.0%. Although the jobs report was solid, the slow pace of wage creation saw average earnings rising just 0.1% on the month.

The U.S. dollar was seen weakening into Friday’s close as a result. Elsewhere, Canada’s jobs report showed that the unemployment rate fell from 5.9% to 5.8% while the economy was seen adding 15.4k jobs which were below estimates of a 21.3k job growth that was estimated.

Looking ahead, the economic calendar today is light with no major releases expected. The currency markets are expected to follow through from Friday’s price action.

EURUSD (1.2320): The EURUSD closed with a doji on Friday following Thursday’s strong losses. With price action closing back below the price level of 1.2363 – 1.2333 level, we expect EURUSD to continue to push lower as a result. The downside target comes in at the previously established low of 1.2179, followed by a move towards 1.2090 – 1.2070 which could be tested as the markets head closer to next week’s FOMC meeting. To the upside, a breakout above 1.2333 could signal near term gains but the upside bias seems to be easing.