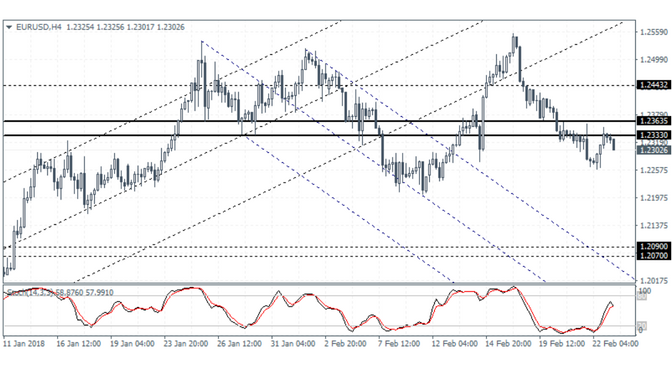 Data from the UK showed that the second revised estimate was lowered to 0.4% down from the first estimate of 0.5% for the quarter. This brought the annual GDP in the UK to 1.4% on the year missing estimates of 1.5%. The business investment for the quarter was also revised to show a flat print, compared to the initial estimates of 0.5%. The British Pound was seen falling on the news.

Later in the day, the New Zealand quarterly retail sales data showed a 1.7% increase on the quarter ending December 2017. This was stronger than expected as retail sales increased from 0.3% in the third quarter.

Looking ahead the data will cover the final inflation estimates for the month of January. Canada will also be releasing the inflation figures. Economists forecast a 0.4% increase on the month, which would reverse the 0.4% decline from the previous month. A number of Fed officials will also be speaking which includes Dudley, Mester and Williams.

EURUSD (1.2302): The EURUSD managed to post a modest rebound yesterday closing on a bullish note. However, the gains look to be short lived as price action earlier this morning shows a reversal. This coincides with the rally to the resistance level at 1.2363 – 1.2333 level. As long as the resistance holds, EURUSD could be seen posting further declines targeting the immediate support at 1.2090 – 1.2070 region. Price will of course need to close below the previous lows at 1.2213 from February 9th.