Orbex Lights It Up Blue!

Life became extremely demanding, leaving us no free time to think about less fortunate people and the difficulties they face on daily basis. This is the reason Orbex has decided to offer its solidarity and support .  So here is the story of how Orbex joined ‘Light it Up Blue!’ campaign.

Orbex is known for its support of athletes and active involvement in social campaigns. We do believe that our efforts matter and we have the power to improve the lives of others.

Few months ago, during the team gathering, we took a decision to engage more in supporting social programs and do the maximum to help charity organizations across the globe. In terms of our social responsibility program, Cyprus Autistic Association was one of the first we got in touch with. We were amazed by the enthusiasm of those people, and the way they were devoted to helping the society.

Without exaggeration, our team was excited about the entire idea. And that’s how we ‘Light It Up Blue!’ 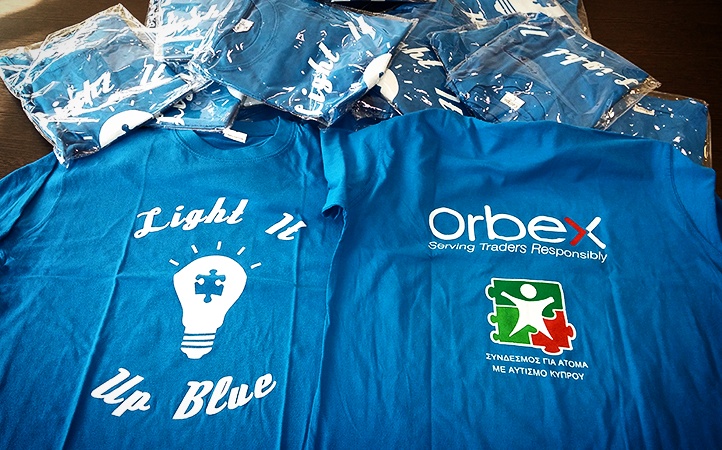 The Autism Awareness day is a recent initiative that was officially recognized by UN only in 2007 and three years after, international organization ‘Autism Speaks’ launched its first ‘Light It Up Blue’ campaign.

“Every year on World Autism Awareness Day, Autism Speaks celebrates its international “Light It Up Blue” campaign. Thousands of iconic landmarks, skyscrapers, schools, businesses and homes across the globe unite by shining bright blue lights in honor of the millions of individuals and families affected by autism. Individuals everywhere wear blue in honor of our community.” (Source)

Why is it important?

Approximately 1% of Earth population has Autism Spectrum Disorder (ASD), an official name for autism. Though a large number of the people with autism have an average or above average I.Q., they are commonly discriminated against in employment and have limited access to quality education.

Why do we have to isolate people that have just a different vision of the world? Autism Awareness day brings more information about autism to the general public; it’s time to see the world from a different angle and offer our help.

Join Cyprus Autistic Association and Orbex on the 2nd of April to celebrate and honour the unique talents and needs of people with autism! Let’s Light It Up Blue!