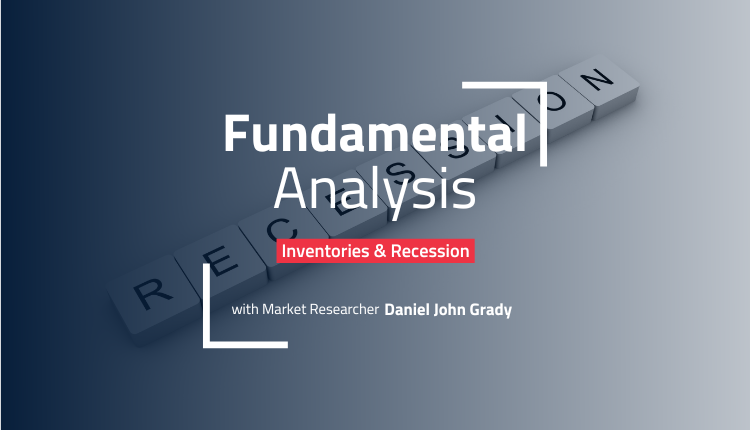 Cathie Wood, who manages ARK investments funds, is popular among retail traders. Which is not surprising, since smaller traders tend to be more bullish and growth-favoring. So, it was quite noteworthy when she came out yesterday to say that “we” (that is, the United States) are in a recession.

Of course, we won’t know whether that assessment is correct until Q2 data is published later this month. But the definition of a recession is at least two quarters of negative growth. Meaning we can’t know a recession is in place until at least two months into it. So, waiting for the official diagnosis isn’t all that helpful for traders.

Wood’s assessment was based on a “big problem” with inventories. And this fits into the classical definition for the cause of a recession. But, given the extraordinary circumstances of the last two years, there could be a wrinkle in that diagnosis.

Typically, the root cause of a recession is a mismatch in inventories. It varies from recession to recession, of course. But essentially, a mismatch between demand and supply causes an inventory buildup, and then a recession is needed to “balance” the situation again.

How this all works

For example, the prior “great recession” of the subprime crisis was caused by an excess in inventory of mortgage-backed securities. Before that, it was an excess in tech stock offerings. And so on. Basically, demand for a particular asset increases, which leads to prices going up for that asset. Then, producers are motivated to make more of it to meet demand. However, there is a bit of delay between when things are produced and when they are actually bought. So, demand starts to wane, but production continues to increase. Once supply exceeds demand, inventories for that asset grow. Then, the price drops as suppliers try to get rid of that inventory, and producers cut back production since the price is falling and they aren’t sure that they will be able to sell. Thus, there is a “crash”.

That phenomenon happens all the time in smaller asset classes. But, if it’s an asset that covers a large section of the economy, such as housing, or the stock market, or the retail sector (as in the current case), that general drop in prices and pullback in production is what is generally understood to be a recession. So, being worried about rising inventories in a large segment of the economy is logical, and in line with history.

The thing is, this time, supply chains have been disrupted for well over two years. Businesses are stocking up on what they can, because of uncertainty about when they will get another shipment. In many cases, firms are getting excess supply with one part, and lack of supply with another, leading to inventory buildup in certain areas. Which means the current inventory growth could be a sign of a different problem.

Of course, that also doesn’t mean that when supply chains are finally fixed, and supply starts to balance out, we won’t see the same “oversupply” issue that leads to price drops and slowing demand. But it is something to keep in mind when fretting about the potential implications of growing inventories, particularly in the retail sector.