Major Banks Miss Earnings: Why It Matters to Forex Traders 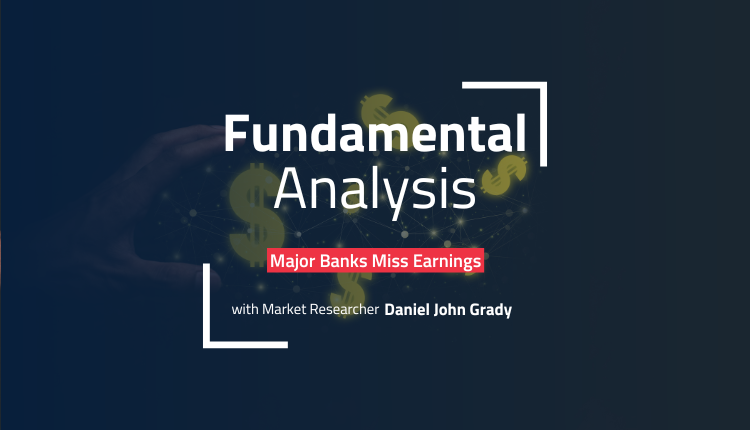 Banks are the largest players in the Forex sphere, so it’s logical that issues among banks could have repercussions among currencies. Generally, forex traders don’t care about how profitable major global banks are. But now there is something going on in the banking system that is being exposed by earnings, and it could have some important implications for where major pairs are going. Particularly the dollar.

In higher interest rate environments, banks typically make more money. And banks like JPMorgan, Citi and others did see their revenue increase. But most underperformed expectations on the bottom line: They made less money than expected. Here’s why we should be curious about that:

Getting a handle of the situation

To understand what’s going on, we have to take a brief look at how banks make money. Most of a bank’s income is what’s called “net interest income”, which is the difference between what it charges borrowers, and what it pays to borrow money. It’s a kind of interest rate spread, which is something a lot of forex traders are likely familiar with.
So, if interest rates go up, then banks can charge borrowers more. They do have to pay more to borrow money, but proportionally, there is a bigger difference. That means, for the amount of capital the bank has, it can generate more revenue. That’s what’s expected.

So why did they make less money?

Two factors, and both are important. First, work on a model of lending long term and borrowing short term. That is, they issue loans that are paid off over a matter of years (up to 30 years if we are considering mortgages), but finance them with short-term borrowing of their own. Typically, they borrow money on a three-month time frame. The advantage is that long-term loans have a significantly higher interest rate than short term loans – usually.

But this isn’t a usual situation. The yield curve is inverted, meaning that long-term credit actually has lower interest rates than short-term credit. Why? Because traders are betting on the Fed having high rates in the near term, but cutting rates so that two-three years from now, interest rates will be a lot lower. Why would the Fed do that? Because the Fed cuts rates in a recession.

Stocking up for tough times

The second reason that many banks reported lower profits is that they had significantly higher provisions. This is technical speak for banks putting money aside to cover for people not paying back their loans. Because if someone doesn’t pay their loan, the debt doesn’t just disappear. Provisions are necessary also to deal with another issue, which is if people are late in paying their debts. Banks still have to pay interest on the money they borrowed, so having provisions allows banks to provide breathing room to borrows.

And why would banks be worried that customers wouldn’t be paying back their loans? Because that’s a typical thing that happens in a recession. Ahead of expected turbulent economic times, responsible banks increase their provisions, and report less income than analysts expect.