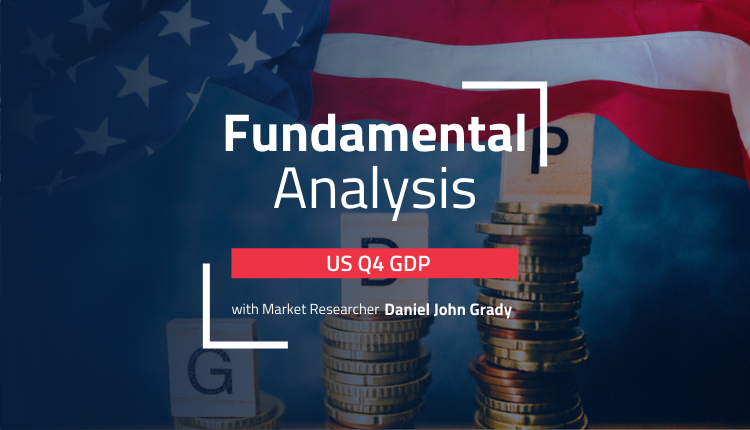 Tomorrow we get the first look at US GDP numbers for the last quarter and the full year.

The consensus is that there was a significant acceleration in the economy in the last three months. That included the period of omicron’s first detection and worries of its potential impact spread around the country. That the US economy managed to get through the start of the omicron wave while still growing. And this might be a good sign for the future.

The thing is, given the current monetary policy situation, the data could have a reverse effect on the markets. The Fed is currently trying to curb inflation that is at a decades-high level.

Generally, inflation goes hand-in-hand with increased economic activity. That said, there was an expectation for an increase in inflation during the recovery, partially for that very reason. But, now it appears to have gotten out of hand.

The Fed ramping up interest rates could have a negative impact on the economy. In fact, it’s this concern over hurting the economy that could be the defining factor of how fast the Fed raises rates over the coming year. The more worried the bank is that growth will be hurt, the less likely they are to raise rates as much. The better the economy is performing, then the more likely the Fed will raise rates.

How it all fits together

The last quarter, of course, already happened. So, there’s no influence from monetary policy.

However, the faster the economy has already grown, the more “room” the Fed has for raising interest rates. Basically, the Fed doesn’t want the economy overheating, or growing too fast. In turn, this can create unstable economic conditions and higher inflation.

Overall, a faster-growing economy would translate into an expectation of a more hawkish Fed. And this generally weighs on stocks and supports the dollar. But if the economy grows less fast, then the Fed is less likely to raise rates. In turn, that could help boost the stock market and weaken the dollar.

Usually, we want to see if data beats market expectations.

In this case, the consensus among analysts is that the US grew at an annual pace of 7.0% last quarter, compared to 2.3% in Q3. That is well above the norm, and the Fed would likely interpret this as “overheating”.

The market is adjusting to that expectation, so if we have a substantial beat, then we could see stocks hurt and the dollar getting stronger. But if it misses expectations, things could be a little more complicated.

That’s because the Fed’s expectation for the last quarter is lower, at 5.5% annual growth. So, anything above that amount would be more than the Fed’s most recent expectations. This means that they could readjust their rate policy in response to the data. Thus, the market might not react so much if the result is within that 5.5-7.0% range.