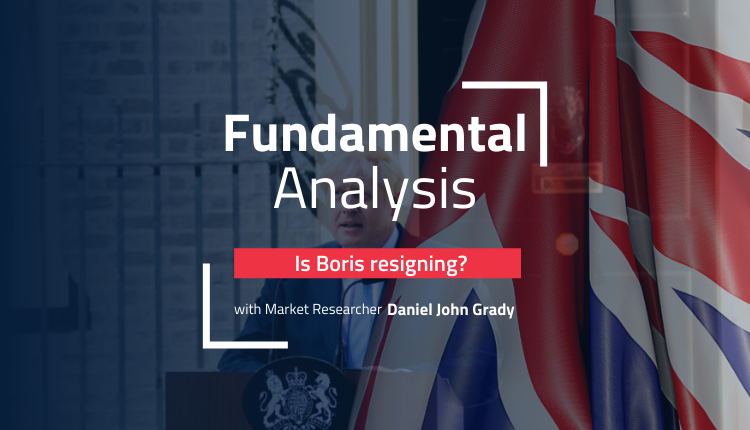 The latest series of political scandals in the UK made an incursion into the markets today.

Specifically, the Financial Times ran a headline suggesting this was the worst political situation since moving into 10 Downing Street. The headline said there was a mutiny among Tory MPs, following yet another revelation that the PM held a party in the middle of national lockdowns.

Naturally, this led to some speculation that the PM could be pressured to step down. And this would be the third resignation in a row for Conservative PMs. But, despite the headlines, there might be some indications that Johnson could ride it out, and that it’s unlikely he will resign.

It’s down to the polls

Tory MPs have become increasingly restless since late November when polls showed that the majority of Britons had shifted their support to Labor. Since then, the personal approval of Johnson has continued to crater. In fact, just 31% of the public approve of his government, against 61% who disapprove, according to the latest polls.

However, despite the anger of many party leaders, at least according to YouGov, a majority of Tory party members don’t want the PM to resign (not yet at least). Less than a third of Conservative respondents said they wanted a new leader.

One of the reasons that Conservatives may not want a new PM could be tactical.

The current leading contender to replace Johnson is Chancellor Rishi Sunak. He has more support on Whitehall and is a favourite among betters. Nonetheless, he is still embroiled in the same party scandals as Johnson.

And Johnson might have more support among Conservatives because the PM’s participation in media coverage overshadows Sunak’s. If he were to become PM, the situation would reverse, and he would face a similar popularity challenge as Johnson.

The bottom line is that there isn’t much advantage to replacing the PM if the new PM will have the same public perception problems. This might be the crude math that Downing Street is doing, as other potential candidates who aren’t involved in the party scandals have significantly lower public approval at the moment.

What does it mean for the markets?

Markets tend to hate uncertainty. But the resignation of the PM would probably not cause any change in terms of fiscal policy. Especially if it’s Sunak who replaces him since presumably he would keep the same policies he’s already implementing as Chancellor. Despite the media focus on the scandals, as far as the markets are concerned, there won’t be much impact.

What could have a bigger impact, however, is if Johnson doesn’t resign, and keeps cratering in the polls. That would encourage Labor to mount a harder opposition, although it would help prevent Johnson from facing a no-confidence vote. The next elections won’t happen until 2024, when the public might forget about the scandal.

At this juncture, no one is expecting a snap election. Replacing the PM could leave the markets unaffected. Nevertheless, if talk of a snap election starts to surface, then we might want to start reevaluating our UK-exposed portfolios.