December Inflation: US vs China 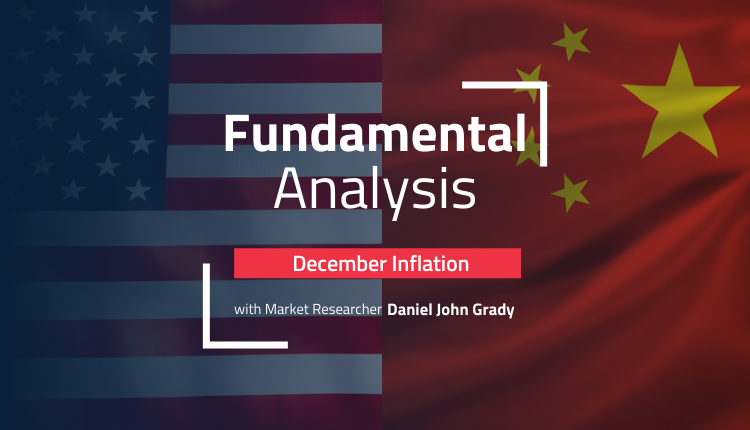 Tomorrow the world’s two largest economies report their latest inflation numbers. And this will pretty much affect every market.

China will also release a series of other data points that could be important for its key trade partners. Additionally, it’s interesting to contrast the data from the US and China, as their economic figures appear to be diverging.

China has managed to keep a lid on covid cases, reporting infections only in the hundreds within a population of over a billion. In turn, this allowed China’s economy to remain active throughout most of the world recession.

Nonetheless, there have been increasing costs as progressively more transmissible strains have been detected. In response to the detection of cases, China has shut down major areas to halt the spread. The latest has been the capital of Henan province.

So, how can all this affect inflation data?

A rebound requires a drop first

While these spot shutdowns have been effective in controlling the virus and minimizing the economic impact, the uncertainty associated with covid has somewhat weighed on the country’s outlook.

Unlike other countries that are or have been experiencing a rebound, China’s economy is supposedly recovered from the initial impact of the virus. As a major exporter, the global supply chain crisis has affected China. This means that even if the economy is fully revived, it can’t grow as fast.

In turn, this may affect the value of different currencies, particularly the dollar, given America’s reliance on Chinese imports.

Analysts anticipate that China will report a monthly December inflation of 0.2%, half of the rate from 0.4% in November. However, PPI (a measure of how much businesses are paying for goods), could show an annual increase of 11.1%, compared to 12.9% prior.

The expectation for China’s M2 money supply is to show an annual increase of 8.7% over the prior year, with New Yuan Loans of CNY1.25T compared to CNY1.27T in November. While China has expanded their monetary base to help support the economy, it’s not on the same scale as in other countries.

There is an increasing consensus that the PBOC will further ease over during the coming month. That’s especially in the wake of tighter financial conditions due to the housing crisis.

Meanwhile, in the US, inflation will continue to accelerate, despite the Fed increasing the rate of its taper. The effect of bond purchases on inflation is generally less than the impact of raising rates. As the Fed has vowed to finish its bond-buying before hiking, the inflation rate could still be uncontrollable for a while.

Analysts project the US December CPI change to come in at 7.0%, compared to 6.8% in the prior month. The core rate, excluding food and energy, may show increased acceleration to 5.4%, in comparison to 4.9% in November.