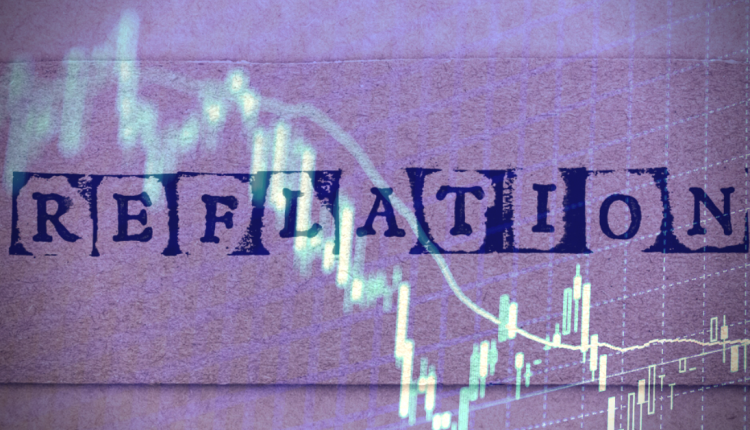 From the name, you might have guessed that reflation trades have something to do with inflation.

And you would be correct. But, what’s the difference between inflation, reflation, and deflation?

And how do you trade that?

How the process starts

When you have a recession, cash is king. Everyone wants to hold on to what cash they have and preserve liquidity.

This means that the value of cash goes up. The name for that is deflation; the money you have is worth more than before. Often this is transitory because recessions are transitory.

Once the economy bottoms out, it starts recovering.

The central bank injects funds into the market, investors have a return of confidence, and start spending. Finally, job losses reverse course, consumers are confident in buying again, so deflation ends.

The normal trajectory reasserts itself.

The current accepted practice for monetary policy is to have a modest amount of inflation during the normal course of economic activity.

So, when the market transitions back from that recession-era deflation, to post-recession growth, it’s said that we are experiencing a period of “reflation”, a “return to the normal level of inflation”.

Now, of course, policy could overshoot, and inflation could return to pre-recession levels, then keep going. Or it could not return and have an extended period of low inflation.

Both of those are headaches for the central banks. But, those are long-term situations and are a part of the “normalization” process in which we normally understand “reflation” to occur.

Where we are now and the trades

Evidently, now that we are putting the covid recession behind us, we can say we are in the process of “reflation” as the economy returns to normal over the next few months.

That process has some important implications for the market. And like all market changes, there are people out there trading that. Which brings us to bonds.

Bonds trade on the basis of their interest rates and inflation, or “yield”.

If inflation goes up, then the yield goes down, because the interest paid on the bonds is less. Additionally, as the economy normalizes, then businesses will issue more bonds to have the capital to expand.

Those bonds will be issued at a higher interest rate.

It’s all supply and demand

Because bond traders expect higher inflation, they demand higher interest rates. This means that bonds have to offer higher yields in order to get bought now.

In turn, this increases the value of the currency, and weighs on the stock market, because traders can get more returns with less risk by investing in bonds.

This phenomenon is usually transitory until the economy recovers and the new inflation rate asserts itself. In the meantime, the market might behave as if it were in “risk-off” mode for a while, until the reflation trades balance out.