EURUSD upside seems to be done. Is it time for a retracement? 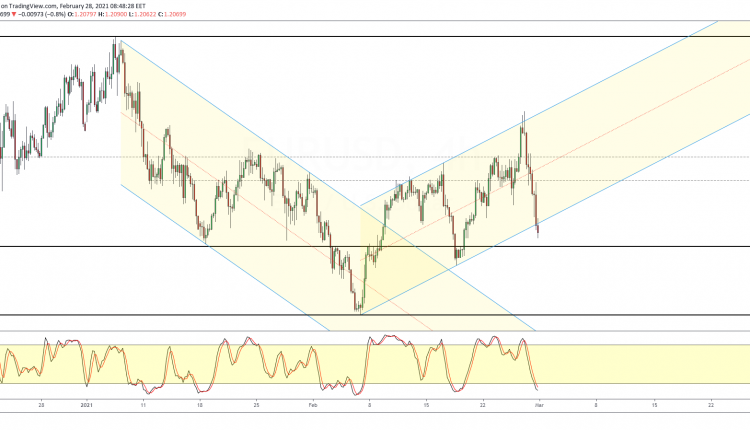 The U.S. dollar posted a rebound amid the bond markets turning frothy. As yields rose in the U.S. treasury markets, the dollar also managed to catch a bid. This comes as bond investors and the Fed are in a tug of war amid rising yields. The rise in the U.S. dollar pushed back many of its peers to close lower into Friday’s close.

The euro currency fell 0.8% on Friday following a failed attempt after rising above the key technical resistance area of 1.2177 – 1.2144. However, in what seemed like a bullish breakout, Friday’s price action clearly trapped some of the bulls. This also comes as the inverse head and shoulders pattern on the 4-hour chart was quite evident.

The close below 1.2144 suggests some near term downside in prices for the moment.

The price action on the daily chart suggests a bearish move following the strong rejection above 1.2150 on Thursday.

Retracement in the rising price channel

For the moment, the EURUSD is below its 50-day moving average. But we could see some modest retracement taking place. With the Stochastics oscillator also quite oversold, we could see another attempt to the upside.

This coincides with the fact that the EURUSD is currently near the lower end of the rising price channel. Consequently, a retracement back to the 1.2144 level forming a lower high would be confirmation for price moving lower.

Therefore, it is quite likely that the EURUSD will rise back to the 1.2144 area. As long as price action is capped below this resistance level, we expect the downside to prevail. The lower support area at 1.2050 remains the immediate target, followed by a move to 1.1950, marking the lows from Feb 5th.

On Monday, the economic docket shows only the ISM manufacturing report due. Forecasts show a stale print on the data. Still, ahead of the ISM data, Fed members Brainard and Williams are due to speak. Both members are considered to be centrist on their take on monetary policy.

Previous comments from both members show that they are somewhat cautious and therefore this could be a bit of a positive news for the euro in the short term. We also have the ECB President Lagarde speaking later in the evening on Monday.

As the week unfolds, number of headline data points are due including the ADP private payrolls, Fed Powell’s speech and the monthly non-farm payrolls report.

The jobs data could potentially see the USD scaling back its gains if the data continues to show the same weak trend.

Given the above, there is a very good chance that the EURUSD could therefore drift sideways between 1.2144 and 1.2050, with a break out below 1.2050 giving more weight to the bears.