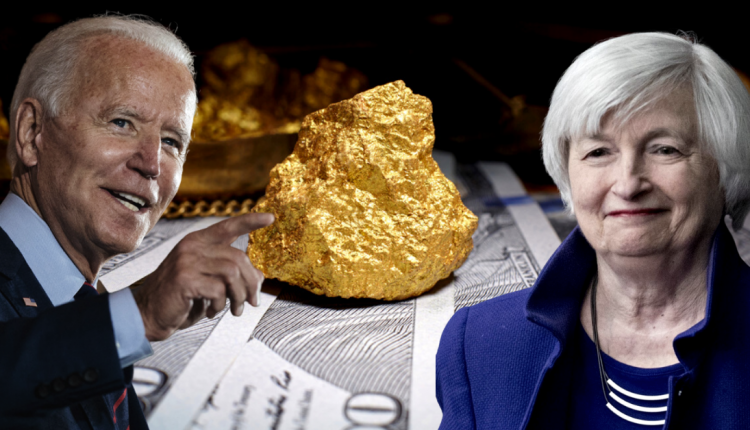 The yellow metal surged higher over the last 24 hours in response to the swearing-in of the 46th president of the United States, Joe Biden.

With Biden’s inauguration comes the expectation of a big shift in US policy towards more expansive fiscal policy and less influence over the Fed and the US dollar.

During the course of Trump’s presidency, he was often heard talking the dollar down. He also criticized the Fed and called on the need for more and greater rate cuts.

Under the new era of Biden and former Fed chair Yellen as treasury secretary, the market is expecting major new stimulus along with less of a focus on the exchange rate.

Consequently, the US dollar looks likely to come under pressure as the government increases its borrowing to ramp up fiscal spending. This is keeping the outlook for gold bullish.

With the government attempting to pass a $1.9 trillion stimulus package, the Fed has been given some breathing room for the time being.

However, with the pandemic still at a critical point, the likelihood of further Fed easing in the coming months remains high, again creating support for gold. 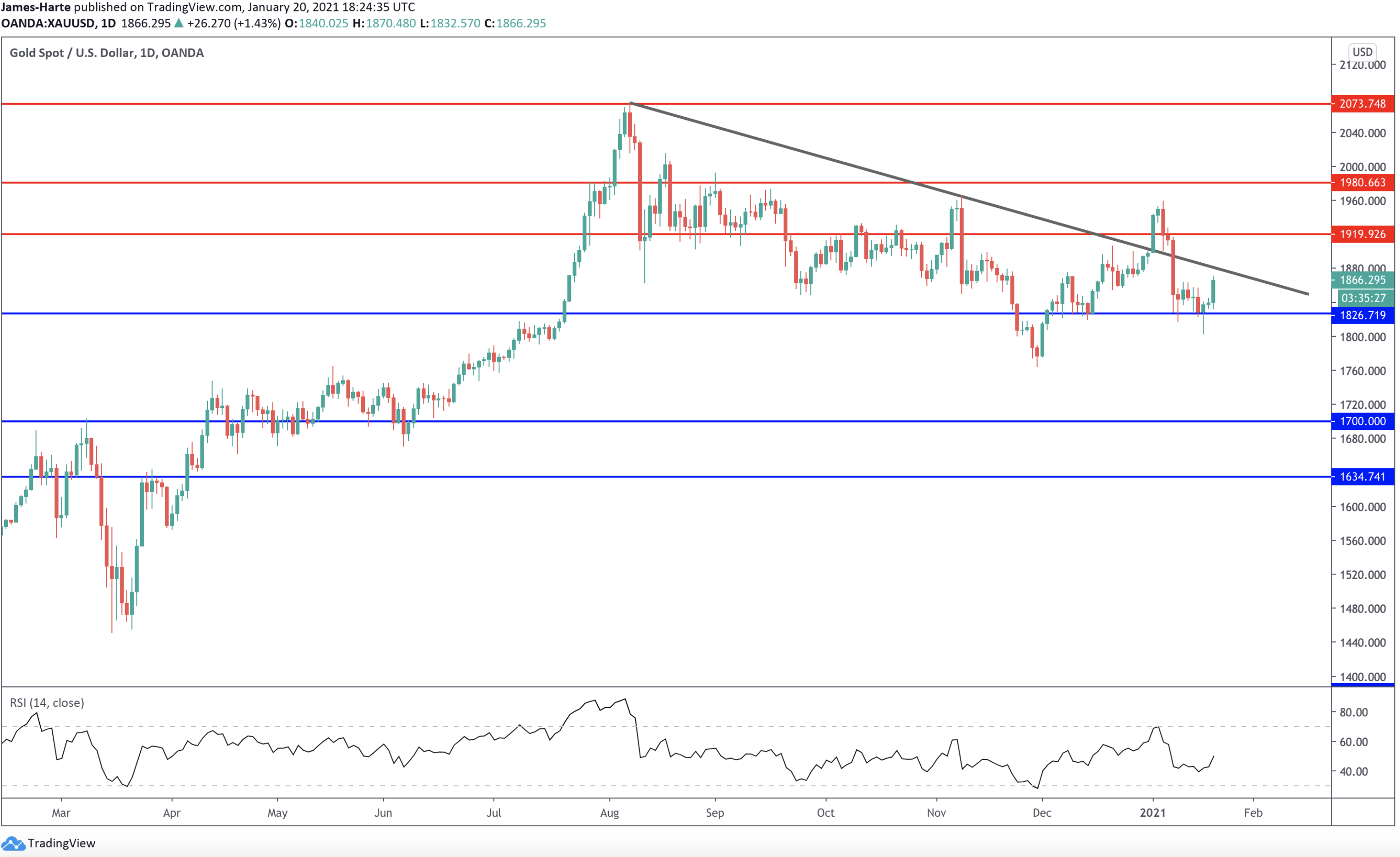 Following a period of consolidation along the 1826.71 level support, buyers have now taken price back up on the level.

Price is now close to retesting the bearish trend line from 2020 highs following a break above the trend line earlier this month.

If price breaks the trend line once again, focus will turn back to the 1919.92 level resistance next. To the downside, should price reverse and break below the 1826.71 level, the next major support to watch is down at the 1700 level.

Silver prices have tracked gold higher this week with the market moving back above the 25.1018 level.

Along with the upside in gold which is lending support, silver prices have also been boosted by the strong rally in US equities.

This rally has seen the S&P and the Dow both breaking out to fresh, record highs.

The boost in industrial stocks is particularly encouraging for silver bulls. And, along with USD weakness, this should keep silver prices supported in the medium term. 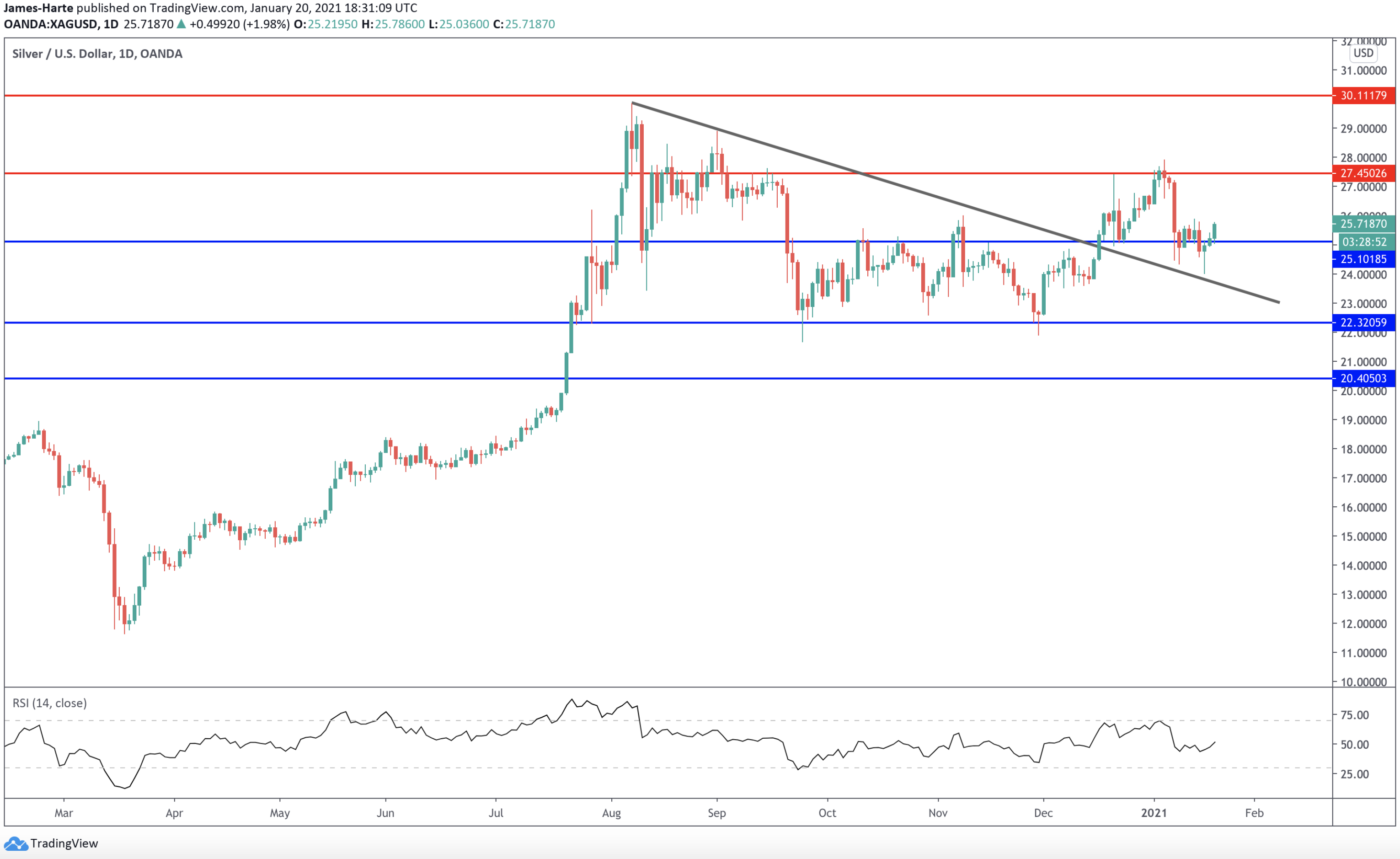 Following the dip back below the 25.1018 level, silver prices found buying interest as they approached the broken bearish trend line from 2020 highs.

While the 25.1018 level holds as support, the focus is on further upside with a fresh challenge of the 27.4502 resistance the next key test for bulls.