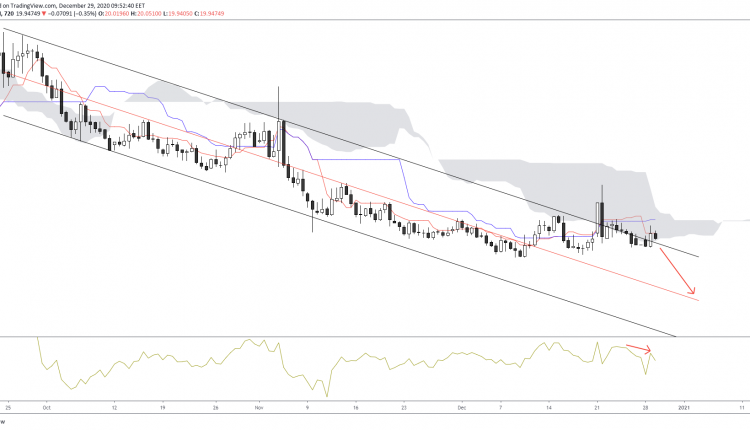 USDMXN has witnessed a downward spiral in prices during the last quarter. The descending channel that was highlighted in October seems to be apparent as prices look for a breakout.

The recent bearish divergence noted on the momentum indicator looks to submerge the trend once again to the downside. Adding to this, the lower border of the Ichimoku cloud is weighing heavily on the currency pair.

Should prices fall back into the channel, then the mean could be the next target. However, if the candles can remain lofty and inside the cloud, then we will await further clues on the indicators for another attempt at recent highs.

An intraday outlook shows a recent false spike has failed to gather momentum, as prices trade back below $20.

The current setting shows consolidation between the 61.8% and the 78.6% of the 19.6952/20.6651 Fibonacci leg, which also contains the conversion and baselines of the Ichimoku indicator.

The recent hidden bearish divergence could signal another move to the downside, breaking the long-term descending channel.

Another attempt at the false break status will first require a move past the 61.8% and the top border of the cloud.

Why Traders Should Care About Georgia Runoff Election