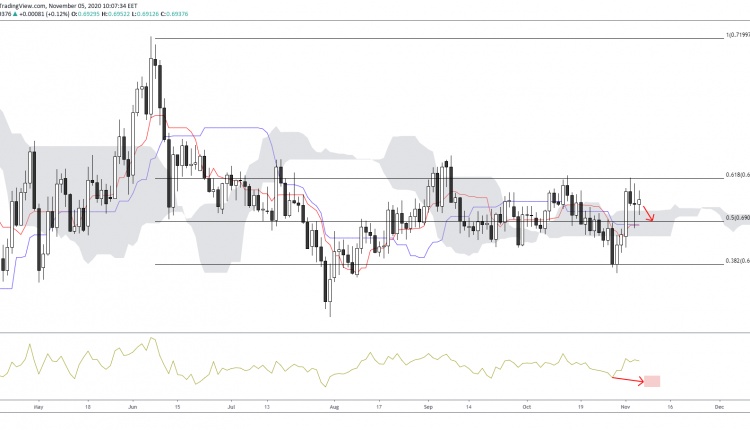 CADCHF has been trading in a mostly sideways range since the downturn experienced in June. The 50% Fibonacci of the 0.7199/0.6604 downside leg is currently acting as a median regression.

Prices are clinging on to the Ichimoku cloud which indicates another test at 50%. Once the cloud engulfs, then a move to the 38.2% Fibonacci level is likely.

We now await further clues on the momentum indicator to see if a hidden bullish divergence could come into play. If this emerges, then another attempt to break above the 61.8% could be possible, as we saw in the early stages of September.

A look at an intraday perspective shows prices are currently trading in an ascending channel. Prices are mainly trading at the mean which indicates the channel could maintain an upwards trajectory.

However, a look at the momentum indicator hints at a hidden bearish divergence. This could lead prices back down to the lower channel level and begin the engulfment of the cloud.

The base and conversion lines of the Ichimoku indicator show a confluence level, meaning a breakout could be imminent. If this divergence proves to be false, then another push to the mean and the higher channel levels could be likely.