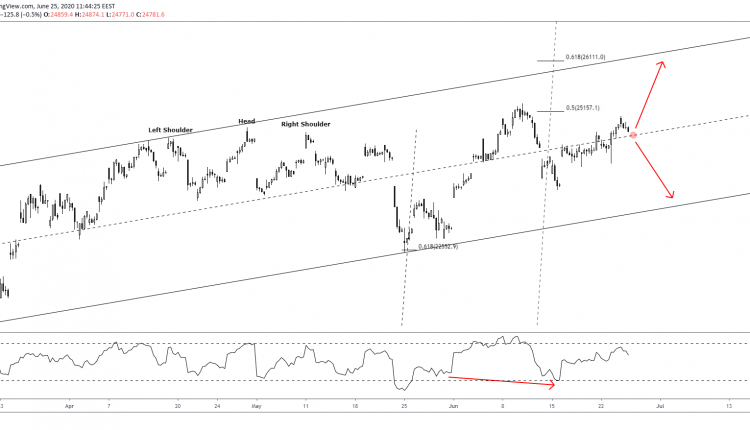 The Head & Shoulders identified on May 25th offered a bullish opportunity near 22560. Since the bounce at the golden ratio, prices have marked fresh highs above the 25000 round resistance.

With the first attempt having caused a false-break, the index fell lower once again. This decline, however, seems to be a correction now as prices keep trading above the median line of the ascending channel.

This alone suggests that another – this time stronger – attempt could occur; after the index falls to the lower end of the channel or before.

The HSI could then rise up to the golden ratio of the 29177-21111 leg near the 26111 level, and perhaps higher. That is above the 50% Fibonacci retracement level reached during the false-attempt.

A shorter-term view suggests that the index could indeed fall below the median line of the ascending channel. However, another support awaits bears at the 1H ascending channel, where further clues could support our view.

In case we receive a divergence between the RSI (14) and the index, the HSI could appreciate near 26400. This is near the top of the 2H ascending channel.