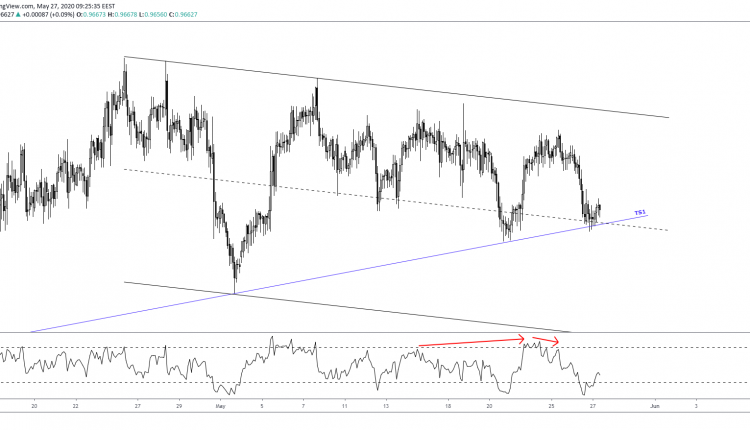 The USDCHF currency pair bounced off a major 3-month trendline support at 0.9650 on Tuesday. At the said level, there also lays the regression medium-term trendline of the descending channel starting Apr 24.

With the RSI (9) indicating more downside, we can expect a breakout of the 0.9650 level. This is likely to trigger an intermediate decline towards 0.96 and even lower in the medium/long-term.

Before breaking the descending channel, however, we could see prices retracing higher. The signal is supported by the short-term RSI (9).

In case bulls come in stronger, we could see the retracement reaching the 50% Fibonacci at 0.9689. This is also where the apex of the higher/high-lower/low structure ends.

At 0.9700, chances of invalidation will increase. And the decline could be delayed until the upper channel is revisited once again.

On the other hand, a break of the TS1 support will increase the chances of falling. A breakout of the lower channel will add on to the bearish sentiment even more.

Test your strategy on how the CHF will fare with Orbex - Open Your Account Now.
analysis_entechnical analysisUSDCHF
0 890
Share FacebookTwitterGoogle+LinkedinPinterestTelegramWhatsAppEmailPrint