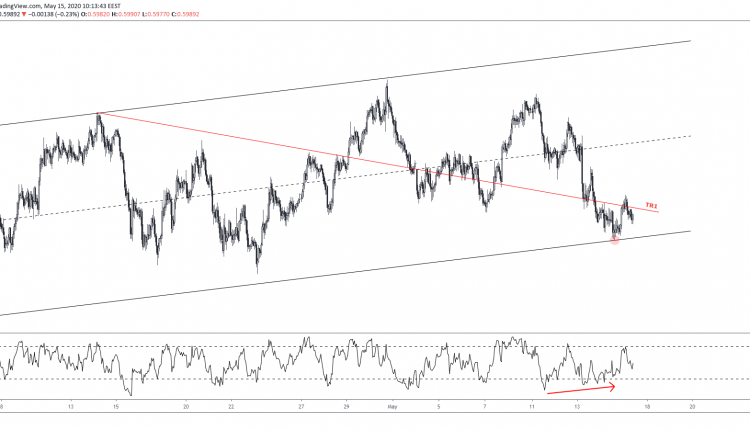 Biased to the upside, NZDUSD has just bounced off the lower end of the ascending channel starting Apr 03. With the RSI(9) supporting the move, the pair is heading towards the psychological 60c once again.

The round level is an intersection between prices, the TR1 trendline starting Apr 14, and the pre-bounce low. This suggests that price action at the TR1 could trigger a pullback before continuing higher.

A closer look suggests the same.

Here, we can notice an additional component to the confluence region- the 23.6% Fibonacci retracement. On this chart, we also see the RSI (9) supporting the move. However, in this case, it is to the downside.

With TR1 having rejected bulls, the pair could retrace lower before reaching the 60c level.  A miss of the 60c level could either be considered as a weak attempt – where prices roll lower – or a weak first attempt, suggesting a second stronger effort.

The pre-mature rejection could lead to further declines outside the ascending channel. The latter, however, could lead either to a rejection at the 60c, or a continuation towards the 38.2% Fibonacci near 0.6032. The said level happens to intersect with the regression line of the shorter-term descending channel too.

Should the 0.6032 reject the bullish momentum, bears will have another chance to push lower. A hidden divergence on the RSI(9) can be expected to validate the move.

Money Heist in the Real World: the Risks of Unlimited Printing