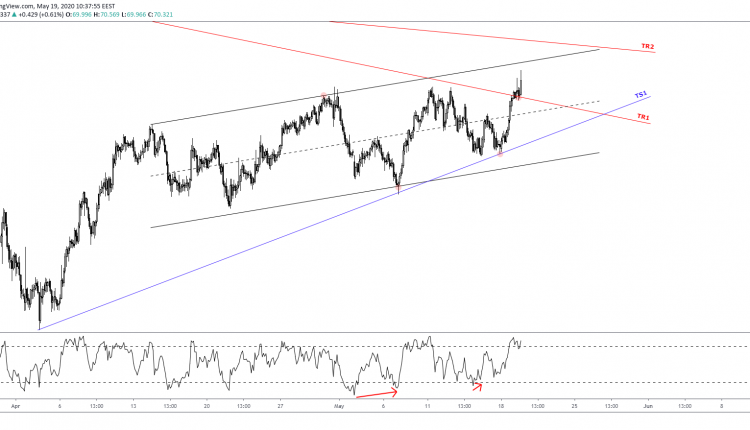 AUDJPY has been trading with a renewed upside bias since the trendline (TR1) break of 69.96. The RSI (9) indicated two signals since May 4.

Despite that, as well as the fact that the pair has been riding an ascending channel in the medium-term too, bullish momentum could weaken soon.

Bears could push prices down towards the channel regression line. There, TR1 and the said line suggest a strong intersection region. That level is near 69.70. First, however, we need a break of the 70 round support.

If bears push through both of those levels, next comes the trendline support (TS1) below 69.50. Then, the lower channel below the 69 round support.

In either case, a pullback is expected.

Since we trade near the upper channel, however, we could have bulls take out the 71 round resistance before retracing (or retest the upper channel). While above 70, changes of that happening remain at elevated levels.

With the RSI(9) offering a bearish signal the upper channel could be retested after a valid short-term pullback.