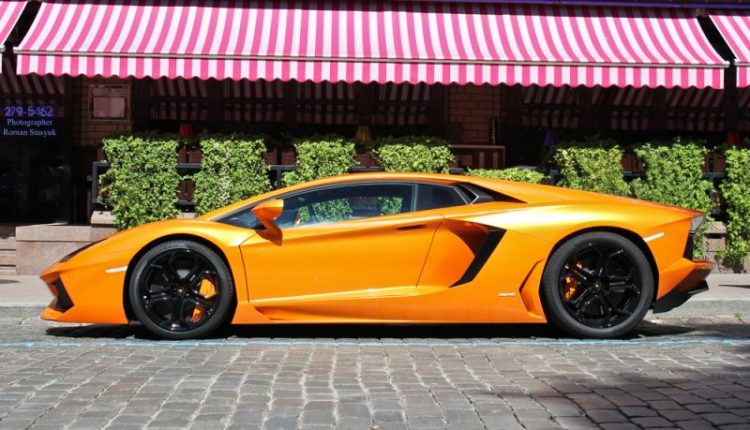 If trading still conjures up images of high-flying professionals, barking buy and sell orders at each other across a crowded, open outcry trading floor, it’s time to revisit those views.

New evidence has cemented the notion that the typical trader is changing. Where once highly-qualified and experienced,  male stock brokers would exclusively occupy the trading domain, with their obscene salaries and luxurious cars, now trading is open to anyone.

Modern traders are using their small amounts of spare capital to place trades from their mobile phones around their day job, rather than coolly carrying out six figure trades from a swanky city office. So let’s debunk the myths about traders, and put those old stereotypes to bed.

The average trader earns a salary of around £38,700 according to a new study by BrokerNotes.co, which analysed the data from over half a million website visitors. This is higher than the national average of around £28,000 (Office of National Statistics), but a long way off the astronomical salaries that you would expect of a trader. What’s more, the report found that more than 50% of traders earn less than £35,000 per year, only 18% earn over £50,000 and of those, 1% earn over £75,000 – which is more in the ball park of what you would expect an average trader’s salary to be.

Warren Buffet once joked about how unoriginal Lamborghinis are. Of course, it’s little wonder that everyone surrounding this billionaire investor owns a Lamborghini – they are characteristic of exceedingly wealthy traders after all. However, it would seem that today’s modern trader is a long way out of this category.

In fact, traders today are more likely to be seen driving to their day job in a Toyota, rather than screeching round the corners of Miami streets in a gold plated convertible Maserati. Of course, there are always exceptions to this rule, and 0.3% of traders drive luxury cars, still resembling the archetypal trader.

In professional trading positions, there are very few women represented, particularly in the top roles. Even in online trading, 90% of traders are still men.

However, what about the other 10%? The advent of sophisticated trading technology that has allowed online brokers to provide easy access to financial instruments such as CFDs, options, futures, ETFs, and Forex. This has opened up trading to a whole new demographic, and women are amongst them.

Women traders have been reported to have a preference for online brokers with easy to use platforms, and despite allegedly being more risk averse than men, the evidence suggests that they have just as much of a preference for financial instruments such as Forex and CFDs as men do. That said, a slightly higher proportion of women than men showed a preference for trading styles that are considered to be less risky, such as binary options, social trading and investing.

There is an exciting future for women in trading ahead. With studies repeatedly showing female traders performing better than men, thanks to their more considered and less aggressive approach to trading, the large investment banks are finally starting to deliberately train and recruit women into trading roles. Not only do they hope to redress the imbalance, but also to benefit from their talents.

There are many complexities involved in trading. So many different factors can affect the way the markets move and there many different analysis tools and methods that provide deep insight into market activity. It’s true that these can take years to master. However, mastering them is not essential to begin trading. With leveraged products, traders can take a speculative stance on markets with an exposure much greater than the amount of their initial deposit. Why this is important is that, rather than traders having to invest thousands of pounds into their initial trades, they get the opportunity to learn with small deposits.

Typically, just $500 is required to open a trading account online. However, in addition to the deposit placed on a trade, the capital in an account is also at risk with such products, which means that traders stand to lose more than they have deposited for the trade. This is a lesson that can be quickly learned if the trader has not taken the time to find this out before starting to trade.

It is also thought that the excitement of crypto currencies are drawing in this younger demographic, as more than 75% of crypto traders are in this age bracket.

It’s fair to say that the vast majority of Hollywood movies are centered around rampant corruption in the industry. Gordon Gekko trading on inside information, the Jordan Belfort pump and dump scandal, and of course Nick Leeson bringing down the whole of Barings Bank with his rogue trading.

Of course, many of the films are based on real life situations, so you’d be forgiven for taking them seriously, but with 9.6 million online traders, and such high stakes involved, there are always going to be stories of corruption around such an industry. However, the truth is that the vast majority of traders are just your average Joe, trading with small amounts of capital online, taking minor profits and losses when markets move in favour and against them, and generally going about their standard daily, law-abiding business. 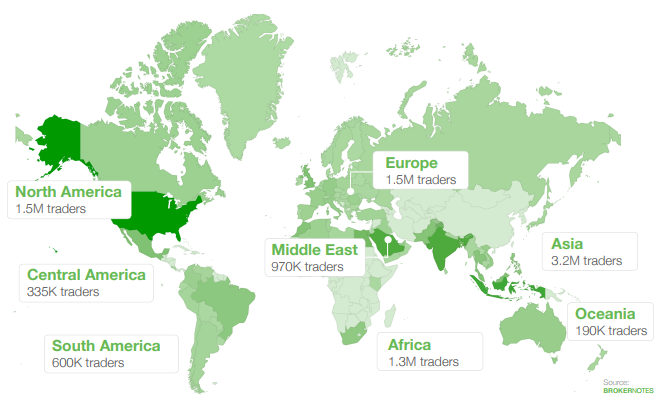 Because of easily accessed online platforms, traders are no longer confined to big financial cities like London and New York. Virtually anyone with an internet connection can register for a trading account and begin carrying out trades within minutes. They are not even restricted by the need for a PC, as a smartphone or tablet will work equally as well. There are around 3.2 million traders across Asia, 1.5 million across Europe and 1.5 million in North America.

The largest financial centres and greatest populations are found in these areas, so that is to be expected. What is interesting to note, however, is that with 1 in every 298 internet users being online traders in Africa and 1 in every 152 internet users in the Middle East, these regions have the highest proportion of online traders.

Within Europe, the UK still has the highest concentration of traders, although not as many of them as you would think are based in London. Just some of the reasons that trading may be more popular in the UK could be due to the changes in regulation that have occurred across Europe recently. France and Holland have banned the promotion of leveraged financial instruments, and in Belgium, leverage is banned.

The Cyprus regulator has also tightened their regulations with regards to leveraged products, and the European Securities and Markets Authority (ESMA) have warned that they will step in and use their product intervention powers where brokers are not being compliant with the new regulations. In the UK, however, potential changes are still under discussion, which means that for now, traders can still have access to high leverage levels.

Rewind a few decades, and the people who traded on stock markets were either stockbrokers, or were the wealthy who employed investment firms and brokerages to conduct their trades on their behalf. People who earned an average salary and also dabbled in trading on the side were few and far between. With hundreds of regulated brokers now offering CFDs and other financial instruments to clients through their online platforms, traders can begin trading with typical initial deposits of just $500.

This is not a technically a myth – it is possible. We’ve all heard the stories about traders who have become overnight successes. However, this is a cautionary tale. Leverage is a fine tool for allowing new traders to put down small stakes whilst getting significant exposure to small market movements.

However, there is a reason that so many regulators are either banning leverage or tightening the controls around it. This is because if used incorrectly, when markets move against a trader, if they are unaware of the risk to their capital, the losses can be devastating. There is likely to be more to come from the world’s  financial services regulators on this topic, in an attempt to protect customers from unexpected losses. This is a good thing for the industry, as it will help improve market confidence, but the flip side of reducing the risk of significant losses, is that traders with small deposits will not be able to make as much from their positions.

With trading now appealing to a whole new demographic, it remains to be seen what will happen within the industry going forward, but one thing is for sure, that the exclusive boys’ club of olden times is well and truly behind us.

In a previous professional role, I was the one standing in the background nervously observing offices full of city traders surrounded by dozens of screens, while they coolly placed 6 figure trades. Yes, that's right - I was the compliance auditor. I can't have done my job properly though, as shortly before I left, the great financial crisis hit. I took a break from financial services regulation during this period - which was as good a time as any to be out of the industry, I reasoned, but the feeling of excitement I used to get when I entered trading rooms never left me. So, recently I have discovered online trading platforms, and I'm back in the game - now from the other side. They say women are better than men at trading... Let's put this to the test.