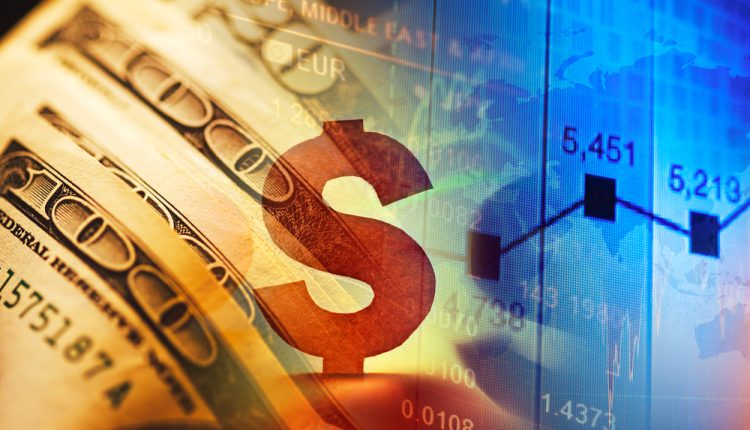 The US Dollar Index declined over -1% for the week after opening the week near 95. This week’s bearish price action marks a third consecutive week of decline since the highs near 97. On the weekly charts, the next support comes near 93.25 which could offer some bounce or support to the declines.

On the daily charts, plotting the Andrews’s Pitchfork tool, price action has been trending lower within the upper channel after a bit of consolidation just below the broken support at 95.5. To the downside, price is now trading near the major support of 93.8 through 93.19 (rounding off the support to 93.25, which fits in with the weekly view).

Considering the fact that the resistance near 95.50 hasn’t been tested correctly, a bounce off 93.25 could very well see a rally towards 95.50 before prices decline lower. The final objective of this decline is likely to end near 91.4 – 90.6 region of support.

On the H4 time frame, the US Dollar Index saw a rapid decline after break of the trend line near the 95 – 95.25 level of resistance. Currently, the price action near the lows of 93.95 is indicating a possible retracement of this decline. To ascertain whether the correction will test the broken support for resistance at 95, the RSI could offer some clues. We’re particularly looking for a fresh low in prices, while the RSI prints a higher low. This would offer an initial indication of a possible rally that could kick off the retracement towards 95.

Plotting the price channel, we also see that the broken support level is very likely to be a good price level for a test of resistance.

In terms of the fundamentals, the week ahead does not feature any important releases in store. Of course, the final revision to the first quarter GDP is due, but it is likely to remain unchanged with the possibility of a modest revision. The important event is however going to be the US PCE readings next week, which is the Fed’s preferred gauge of inflation. This economic release is likely to be a catalyst in the US Dollar Index and could possibly shift the sentiment in the Greenback.

The corrective rally in the Greenback is most likely going to a trigger a short term retracement in the USDxxx cross currencies, which should offer traders a good price level to enter into the newly formed medium term trend.