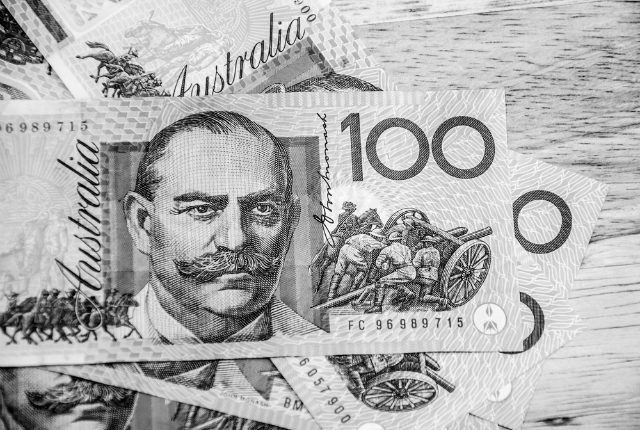 The Reserve Bank of Australia kept interest rates unchanged at 1.50%, a record low at its monetary policy meeting today. The interest rate was left unchanged after policy makers lowered the key rates in May and August this year. The outcome of today’s RBA meeting was in line with market expectations.

The RBA’s monetary policy statement said, “Taking account of the available information, and having eased monetary policy at its May and August meetings, the Board judged that holding the stance of policy unchanged at this meeting would be consistent with sustainable growth in the economy and achieving the inflation target over time.”

The Australian dollar maintained steady gains against the USD since today’s Asian session. Although the Aussie briefly slipped after the RBA’s policy meeting, prices recovered to test session highs of $0.7654.

Other news from Australia saw the second-quarter trade deficit coming in at 15.535 billion. The data from the Australia Bureau of Statistics beat estimates of a 20.00 billion deficit. The previous quarter’s deficit was also revised from 20.8 billion to 14.9 billion. Capital account deficit was seen at 155 million while financial account showed a surplus of 14.217 billion. The deficit data pointed to a strong GDP print for the second quarter which is due for release tomorrow. Economists expect the Australian GDP to have increased 0.40% in the second quarter, which looks a conservative estimate after the trade deficit data was released.

Scott Haslem, chief economist at UBS Australia, said that “the economy was on track to post the strongest growth since 2012.” He expects growth to rise 3.50% on a year over year basis in Q1, accelerating from 3.10% in Q1.

With little over three weeks to go for the Bank of Japan’s monetary policy meeting, the central bank officials have stepped up the usual narrative of keeping the markets guessing on its next policy move.

On a quiet Monday, Japan’s PM Shinzo Abe said that his government was monitoring the movements in the currency markets. His comments came despite the USDJPY seen easing from the near 100yen levels. In a press conference in Hangzhou, China, Abe said, “We are watching movements in the foreign exchange market with full attention. There is no change to our policy of taking robust actions when necessary.”

Abe also expressed confidence that the BoJ Governor would take necessary measures to achieve a 2.0% inflation target. Earlier in the day, BoJ Governor Kuroda refrained from giving any explicit signals on monetary policy which briefly led the yen to strengthen during the day.

On early Tuesday, an advisor to PM Abe, Koichi Hamada was reported by Bloomberg who said that the BoJ should wait until the Fed’s decision before acting. The BoJ’s monetary policy meeting is just a few hours ahead of the Fed’s FOMC decision. Another former BoJ official Kazuo Momma said that the BoJ is unlikely to ease policy when it meets. “The BOJ will look at not just the merits but the costs of its policies at this month’s comprehensive assessment. That makes the hurdle for topping up bond buying or deepening negative rates higher,” Momma said.

Economic growth in the Eurozone increased 0.30% in the euro area in the second quarter of the year. This matched estimates from the preliminary release, data from statistics agency, Eurostat showed on Tuesday. On a comparative basis, the second quarter GDP was slow, well below the 1.60% growth recorded in 2015.

Eurostat said that household consumption had a positive contribution to the GDP while the contribution from fixed capital was flat.

Recent economic indicators from the eurozone continue to point to a slow pace of recovery especially after Germany’s PMI fell to a 15-month low. IHS Markit which provides the PMI data forecasts that the third quarter is likely to be steady but sluggish, with growth expected rise at a pace of 0.30%.

The Eurozone GDP data comes ahead of the ECB’s monetary policy meeting this Thursday. No major decisions are expected at this month’s meeting, but markets expect some kind of verbal signals from Mario Draghi. The scope and pace of the ECB’s bond purchases continue to remain in the center.

The Institute of Supply Management’s non-manufacturing PMI report released today showed that the services sector activity in the US fell to 51.4 in August. The headline figure missed estimates of 55.4 and was lower than July’s 55.5

Ahead of the ISM’s report, Markit’s US services PMI data showed a decline in the reading. Markit’s gauge of services activity in the US fell to 51.0 in August, down from 51.4 in July and marked the lowest reading since February.

Chris Williamson from Markit said, “The slow pace of growth and weak hiring was in turn often linked by companies to growing uncertainty about the economic outlook as the presidential election approaches, suggesting growth could pick up again later in the year.”

Gold unconvinced of a rate hike in September