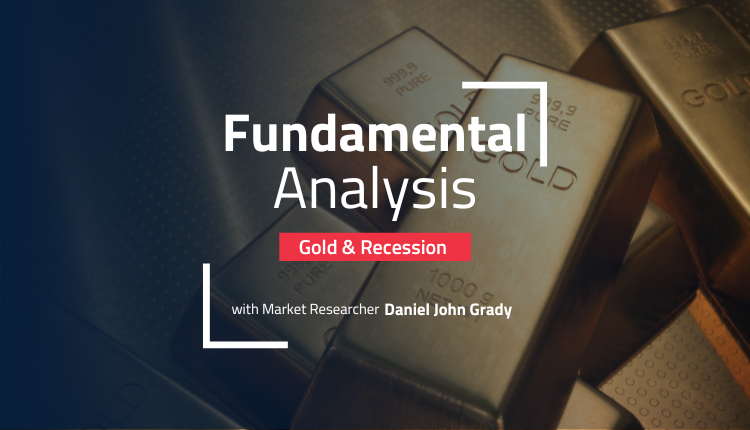 One of the attractive traits for investing in gold is that it holds its value, particularly in times of crisis. It’s been the go-to store of value for thousands of years. Crypto notwithstanding, it’s likely to stay the premier safe haven for time to come. Sounds like buying gold ahead of a recession is a no-brainer, right? Well, like everything in the markets, it’s a little more complicated.

There are good reasons to hold gold in times of economic turmoil and uncertainty. Most financial planners advise keeping at least a small amount of precious metals as savings in some form. But the situation for traders is a little different. The question of, “should I have some gold tucked away for a rainy day?” is not the same as, “should I buy a bunch of gold now hoping to make a profit in the coming months?”.

How worried should you be about the recession?

First thing’s first: Most traders aren’t buying physical gold. Given the relative slow change in the price of the commodity, most traders are leveraging derivatives. That includes the increasingly popular CFD. That depends on the price of gold on the exchange, and isn’t actual ownership of gold. Which is great for trading, because it maximizes liquidity. But, that also means maximizing risk, which is the opposite of the selling point of gold as a safe haven.

Of course, if there is a major catastrophe, and huge market collapse that leaves us in a Mad Max fighting over oil world, having physical gold would be more useful. But that’s not a remotely likely scenario that helps us as traders. What we really want to know is whether the price of gold is likely to increase or decrease heading into a recession, and how does it behave during a recession.

Taking advantage of the downturn

Historically, there is an inverse correlation between gold and the economy. That means that when the economy is doing poorly, gold prices rise; and vice versa. But there are a couple of caveats to that. Gold tends to rise before inflation does, and turn around when inflation is expected to get under control. A recession is one of the ways that inflation can come down.

Market uncertainty can push the price of the dollar higher, which also weighs on gold. A generalized loss in risk appetite, therefore, doesn’t help gold so much because its counterpart also rises. But a recession isn’t a period of uncertainty; it’s when the market knows things are going downhill. That’s the point when typically, gold starts to get a boost.

Not all recessions are the same

Typically, recessions happen after a period of economic growth. But the current environment is somewhat different, as the recession that is expected next year comes on the heels of a pandemic recovery boosted by massive spending. In fact, the recession expectation is largely based on monetary policy tightening to get that “extra money” out of circulation. This isn’t a scenario that has happened in markets for decades, so recent behavior of gold during recessions might not be an accurate guide.

Typically, at the start of a recession, there is a liquidity crisis in the markets. This prompts central banks to open the money spigots, cutting rates, and weakening the currency. But with inflation tripling or even quintupling policy targets, central banks might not be so quick to start easing, meaning a longer recession, but where the dollar remains strong. This could hamper the usual dynamic of gold rising during the early part of the recession.