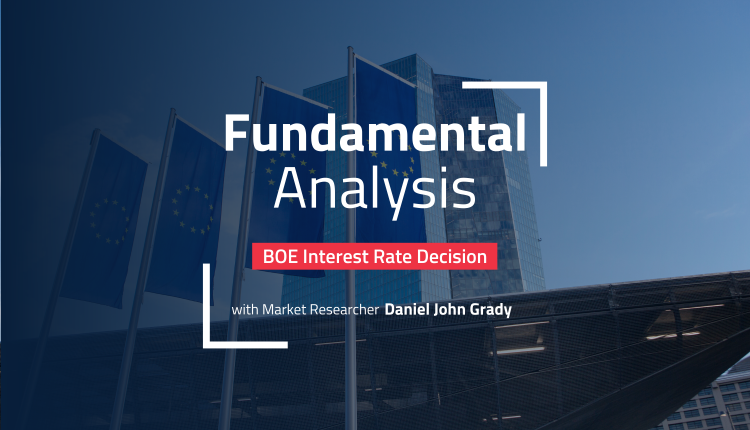 Ahead of tomorrow’s BOE interest rate decision, a somewhat unique and interesting situation has cropped up. Most relevant for us traders is that it could mean there will be a strong reaction in the pound no matter what the BOE does.

According to the latest survey of economists by Reuters, the consensus is that the BOE will hike rates by just 25 basis points. That option won out by just a couple of votes against the alternative: that the BOE will raise rates by 50bps. Given the trajectory of the Bank so far, that makes sense.

Where the wrinkle rises

But a review of research analysts ranging from TD Ameritrade, ING and HSBC shows that a majority expect that the BOE will hike by 50bps. The market appears to be agreeing with the analysts over the economists, with forward yields close to 50bps ahead of target. Meaning that if the BOE fails to deliver, there could be a swing towards weakness in the pound.

The expectation for a “double” hike isn’t all that firm, meaning the pound could firm up quite a bit if the BOE delivers on expectations. This kind of discrepancy is a classic set up for an erratic market following the rate decision as differing views on the outlook for the economy react differently.

What could be the deciding factor?

As has been the situation for months now, the BOE is in a very tight place. Inflation is at a multi-decade high, but business and consumer sentiment is posting the worst figures since the start of the post-covid recovery. If the BOE goes too fast, it could materialize what a lot of economists expect to be an impending recession. But if the BOE doesn’t do enough to bring down prices, then that could lead to a recession. The BOE hasn’t raised rates by more than 25 basis points since before it gained its independence in the 90’s.

It might be that record inflation needs a record policy change to deal with it. Whether MPC members will agree with that is a different matter. The vote has been 3-6 several times now, with the dissenters pushing for a bigger rate hike. All they need is to convince just two members more.

It’s about the future, too

But if there is a bare minimum majority 5-4 in favor of a “double” hike, then many traders could think it’s just a one-off. That could undermine the tightening effect of the hike. Another possibility is that the vote is 4-5, and the “double” hike loses out by just one vote. That could raise hopes that at the next meeting there will be 50bps and undermine the dovish effect of a smaller rate hike.

While analysts and economists disagree on how much the rate hike at the next meeting will be, there is much broader agreement on the BOE raising rates through the rest of the year. Inflation is forecast to remain high, and economic growth to falter. So it’s more a question of whether the BOE decides to take the pain now, or next month.