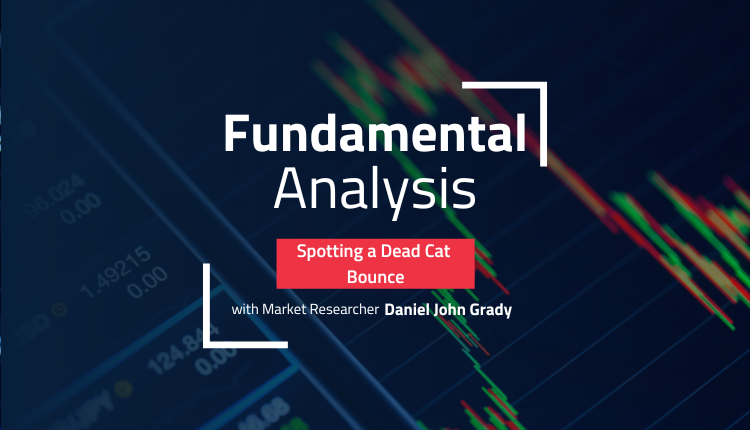 Other names for this phenomenon include bear market rally and sucker rally. From those two names, we can see why this is a relevant topic now, and why you want to be able to identify one. Being able to adjust your trading to a bear market rally not only can prevent losses but can also be an opportunity as well.

So, what are we talking about here?

And here’s the hard part: There is no way to know for sure that we are having a “sucker rally” or a real rally until it’s over. And, of course, by then it’s too late. But, by understanding how the phenomenon works, why it happens, and some tricks of the trade, we can better manage our strategy to avoid common pitfalls around a dead cat bounce.

Why does the cat bounce?

Although “dead cat bounce” tends to be among the more popular ways to call it, a bear market rally is less graphic. Basically, when the market turns over, traders start losing optimism. Traders who expect the market to go up lose appetite as their portfolio shrinks. Other bullish traders might have their positions stopped out and be forced to take losses. This accelerates the market downwards.

At a certain point, the traders have cut their losses, either voluntarily or not, and the market stabilizes. This leads to opportunistic traders moving back into the market in the hopes that it was a bottom. Because the sellers have been exhausted from the latest move lower, a smaller number of bulls can push the market up for a while. But, if there isn’t any real conviction for a return to growth – like the economic fundamentals just aren’t there – then the rally will fade, and the market will return to its downward trajectory of before.

Like corrections in a bull market, bounces in a bear market can take a few days or last for up to months. They also happen several times in the course of the bear market. During the infamous dot-com crash, there were 18 rallies during the bear market. The longer the bear market, the more times the dead cat will bounce.

Generally, a sucker’s rally is considered one that moves up at least 5%. But some of these rallies have moved up as much as 56% over the course of several months. Meaning that depending on your strategy, they could still be a good investment opportunity.

What to do about it?

Since it’s impossible to know for sure when one is happening, or if it’s a real rally, traders can’t really expect to completely avoid a sucker’s rally. But judicious and active management of stop losses as well as conservative money management can help turn this risk into an opportunity.

AUDUSD Cycle Correction b To End Near 0.646