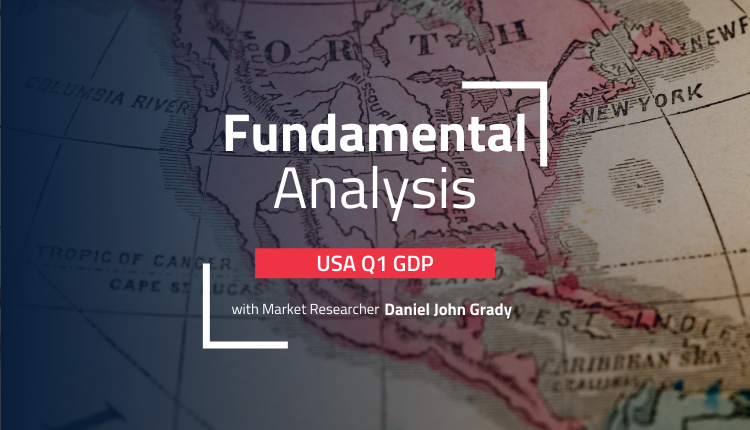 Yesterday, markets got a bit of a surprise as US Q1 GDP was reported at -1.4% on an annualized basis. This was well below the 1.0% growth expected.

Various news agencies provided headlines to soften the implications of the first negative growth since the start of the pandemic. But analysts weren’t so sanguine. Deutsche Bank, for example, doubled down on its forecast that a recession was coming to the US this year.

So, with this rather negative news for the US economy, why did US indices immediately jump afterward? The Dow rose 1.85% and by far the best performer was the Nasdaq with a 3.1% increase, one of the largest since the start of the pandemic.

Simply put, monetary policy. The Fed is expected to be on the most aggressive rate hiking trajectories in decades. The market had been pricing in as many as seven rate hikes this year, with a unanimous consensus that the Fed would hike rates by 50 basis points at the next meeting.

Since the release of the GDP data, that unanimity has been shaken, with increasing numbers of economists moving over to expect just a 25 basis point hike at the next meeting. But the biggest change is at the next meeting. Before, over 90% of economists expected a “double” rate hike at the June meeting. In a matter of hours, that dropped to just one in four. As economists digest the data over the weekend, that could change further.

Stock markets rose substantially during the recession fueled by “cheap” access to capital with near-negative nominal rates. As inflation kicked in, real capital costs went negative, meaning that it was actually cheaper for investors to borrow money than to keep it as cash. With the flight to yields in full play, a lot of money piled into the stock market, pushing valuations higher. That was especially evident in the tech sector, which is overrepresented in the Nasdaq.

The move by the Fed to start selling bonds and raising interest rates reversed that situation. This meant that money was flowing out of the stock market, and indices entered correction earlier in the year. So, if the Fed were to not be as aggressive in its hiking, or the sell-off of its balance sheet, then there would be more capital available in the market to invest in stocks. Particularly, once again, in tech stocks (and other high-valuation assets).

Where things could be going

So, does this mean that the correction is over and stock markets are set to rise (and the dollar set to weaken)? Well, not so fast. There were some worrying data points in the GDP report. For example, consumer spending expanded at 2.7% while consumer inflation expanded at 5.2%. Meaning that in real terms, consumers are actually spending less. Consumers represent two-thirds of the economy.

So, the possibility that the Fed might not raise rates as much as expected could mean there is more liquidity in the market to support the stock market. But that might only be in the short term. It can be understood that inflation is weighing on economic growth at this point, meaning that the Fed could stay the course.

One of the main complaints against the Fed is that they didn’t start raising rates early enough, and now inflation is out of control. They could consider a “better late than never” approach to reduce inflation. After all, if the economy starts contracting, it could contribute to lowering inflation.