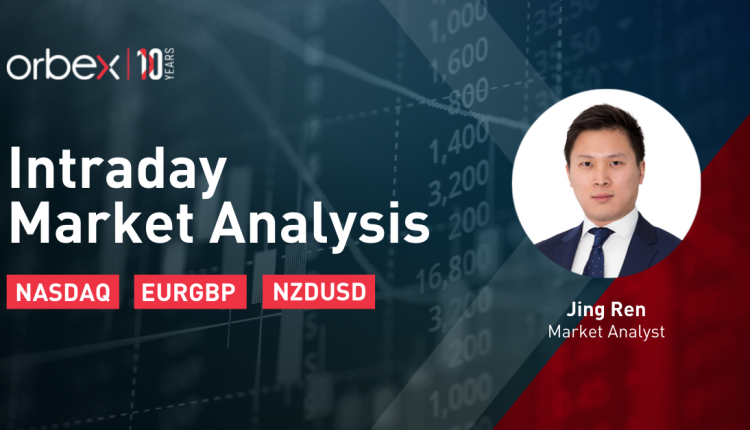 NAS 100 climbs back towards peak

The Nasdaq’s surge above the daily resistance at 13800, suggests that buyers have regained control of the direction.

The bull market may resume when trend followers jump in again. 13960 is the resistance up ahead. Its breach could trigger an extended rally to the peak at 14070.

The RSI has retreated into the neutral zone. 13700 has turned into a demand zone in case the index needs to consolidate its gains.

The euro rallying after the eurozone’s Q1 GDP showed a smaller contraction than expected.

The major support at 0.8560 has held well against sellers’ multiple attempts to break out. The rally above 0.8605 could shift the balance in favor of the demand side.

The formation of a head and shoulder may suggest a reversal in the coming hours. A break above the neckline which coincides with the resistance level of 0.8618, acts as a confirmation. 0.8645 would be the next hurdle, while 0.8590 acts as the immediate support.

The New Zealand dollar is recovering on improved risk appetite across the board.

The pair has found solid bids in the demand area (0.7120) on the daily chart. The subsequent breakout above 0.7230 indicates strong buying interest. 0.7140 is the key support to keep the bullish momentum going.

The RSI has returned to the neutrality area, leaving room for another round of rally.

On the upside, 0.7285, a critical resistance, would be the next target. Its breach could open up the highway towards 0.7400.