What Halting JNJ & AstraZeneca Vaccines Really Means for the Markets 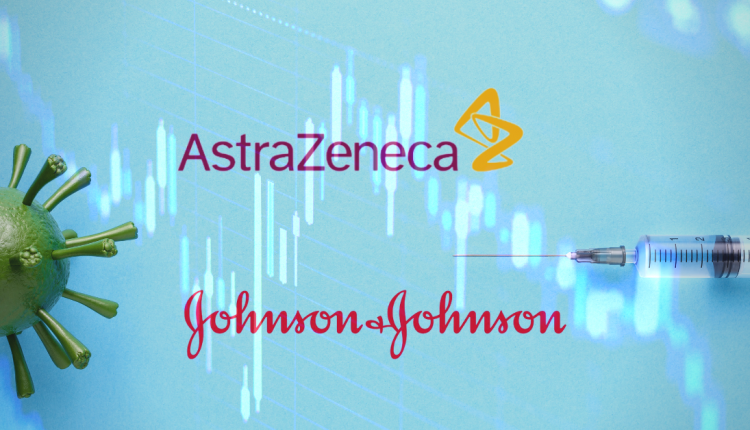 So far, two covid vaccines have been halted due to potential side effects.

Given the speed with which vaccines were developed, it does open a question about whether other vaccines will face similar issues. There have been numerous media reports of scary side effects.

As a result, authorities stopped the rollout of the AstraZeneca/Oxford vaccine before an official review by the EMA. Then, the EMA cleared the vaccine as there was no evidence of a link.

Later on, however, they changed their opinion, suggesting that there was, in fact, a link between blood clots and the vaccine.

So, what’s going on?

Delving into the technical aspects of the vaccines would probably take a whole book, but we need to address the major issues that could affect the markets.

The first question is how likely is it for the JNJ vaccine and even the AstraZeneca one to return to be administered across the board. Some countries are restricting it to certain ages, while other countries are not.

Let’s put this into context.

Out of the 34 million doses of the ANZ vaccine at the time of the review, a total of 62 cases of dangerous blood clots were identified. That is about 12 times as many as you would expect to see in the normal population.

On the other hand, it is a tiny, tiny amount. The rate is 1 in 2 million. By contrast, regular contraception pills that women take produce around 4 in 10 thousand cases of dangerous blood clots.

The number is even smaller in the case of the JNJ vaccine.

It’s about reassuring the public

Naturally, people are apprehensive about a new medical product, so regulatory agencies are clearly going way beyond the extra mile to ensure safety. This means that once the initial media scare is over, it’s likely that countries will be able to slowly resume the use of the vaccine as the public gets used to the relative risk.

It’s also notable that the two vaccines with clot risks are the ones using adenovirus as a vector.

Blood clots are a common effect of covid, it should be noted, with over 30% of diagnosed people presenting them. So, it’s not surprising that blood clots would appear as a side effect of a vaccine that uses proteins from the virus.

The other vaccine that uses this technique is Sputnik V and Convidecia. But those have been largely administered in areas that don’t have as strict tracking of side effects as Europe and the US.

What about the others?

The stars of the vaccine rollout are the mRNA ones. These do not use any proteins from the virus, but use the body’s own cells to build immunity.

It’s too early to say whether they will also have side effects. But, if the cause of the blood clots does have something to do with having proteins from the virus, then they are less likely to have this particular side effect.

Inactivated virus and subunit vaccines like CoronaVac, Covaxin, and the pending Novavax and Sanofi-GSK ones are potentially more likely to present this kind of side effect.

The reality is that halting a given vaccine for a week will likely have minimal effect on the vaccine rollout. There are several authorized vaccines at this point.

Tranching the vaccine by ages as a remedy is likely to just shift demand. For example, in Germany, they are administering the AZN vaccine only to people over 60 like in Germany. And this means that more of another vaccine is available for younger people.

Overall, news of a pause in vaccine delivery is likely to get traders a little nervous about potentially extending the time until the economy normalizes. However, so far, there hasn’t been any news that implies any significant change in the vaccine rollout schedule.