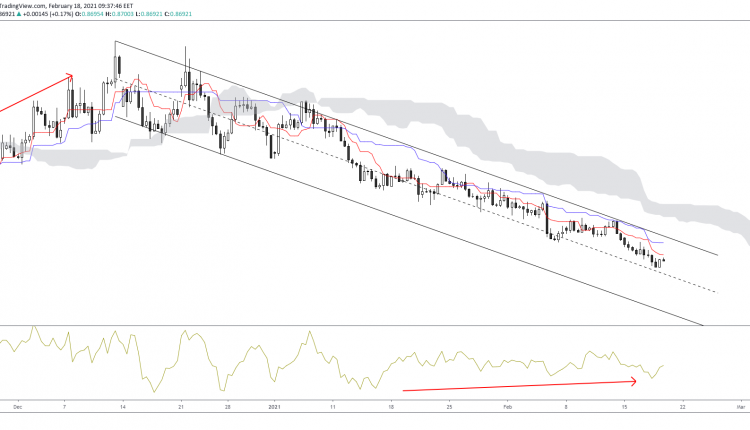 EURGBP has seen a downward spiral since the start of the year, with prices continuously trading in a descending channel.

After a short revival and a peak at the 0.92 region, bears entered the market and the freefall began. The trend has continued to the downside as the conversion and base lines of the Ichimoku indicator weigh in on prices, keeping the range inside the specified channel.

The recent long term bullish divergence did not come into play, as the bias firmly remains to the downside.

Unless we see a move away from the mean to the top end of the channel, then prices are likely to continue the descent.

An intraday point of view looks to a slight revival for the currency pair. A recent bounce at the mid-0.86 level, followed by a bullish divergence could see a push towards the Ichimoku cloud.

Bulls will be hoping for a pierce at the cloud, which has not happened since last week when prices fell through the same level.

A move past the psychological 0.87 handle could see a growth spurt, leading prices to the last recent peak at the beginning of the week.