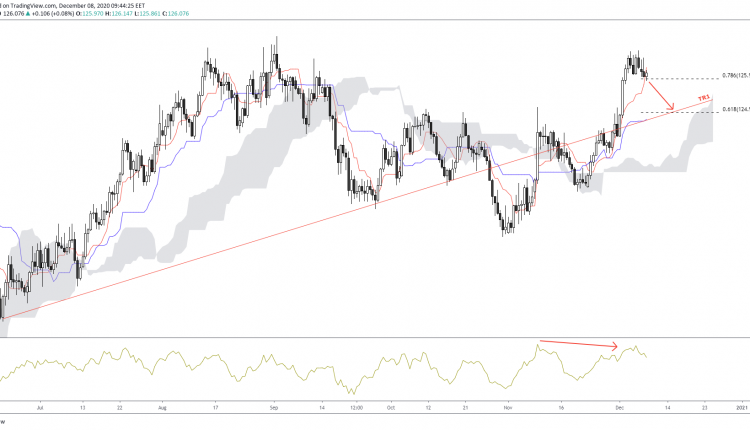 EURJPY eyes a bearish footing as exhaustion sets in with a bullish rally from the beginning of November.

The bullish trendline noted from early June looks to come into play once again, as prices begin their retreat. The first test looks to be the current support at the 78.6% of the 127.09/121.59 downside Fibonacci leg.

A bearish divergence recently noted on the momentum indicator suggests that prices are looking to move towards the golden ratio, which is a confluence of the said long-term trend line.

Should this be broken, then November lows could come into play.

A focus on the intraday outlook shows that prices are trading in a slight ascending channel. This could well be exhausted as another failed attempt to break upwards, now sees a move to the median regression.

Should momentum spike, then we could witness a strong bearish divergence which would bring prices heading towards the Ichimoku cloud.

If prices are engulfed, then a move towards the lower channel would be expected, which would once again test the 123 area.