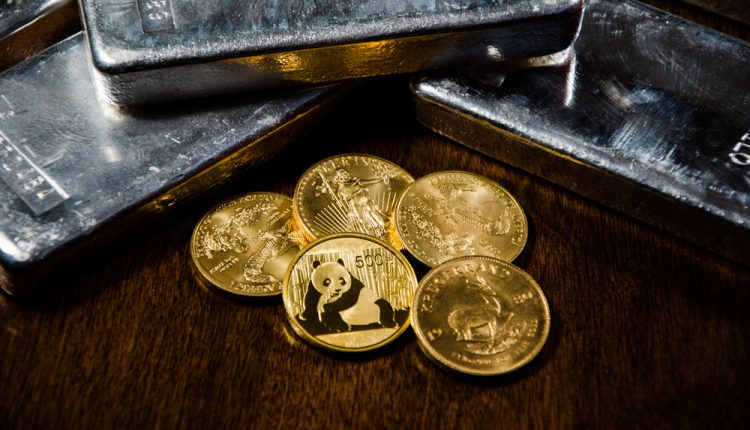 Gold prices have come under heavy selling pressure this week. The safe-haven asset broke below the 1862.07 level which has underpinned price action since July. The sell-off was fuelled by the continued risk-on move which is sweeping across markets.

The move is lifting commodities, equities, and high yielding currencies as traders continued to digest the recent vaccine news.

With a range of companies now pushing ahead with regulatory approval for their vaccines, following successful clinical trials over recent months, traders are beginning to look ahead to next year. There are hopes for economies (and lives) returning to normal as per the plans outlaid by global governments.

The UK and the US governments have both highlighted plans to start distributing the vaccine ahead of the end of the year. The end of Q1 is the target for returning to normality.

Risk sentiment has also been lifted this week by news of Trump approving the start of the transition process for the incoming Biden administration. Trump gave the order at the start of the week for the GSA to commence the process.

With clarity now that Trump is leaving the White House, markets have begun looking at the next steps, with the focus on expectations of the stimulus package that Biden has promised to introduce urgently.

Furthermore, news that former Fed chair Yellen will likely take the role of Treasury Secretary means that greater fiscal support is likely to come, in line with Yellen’s own recent comments. 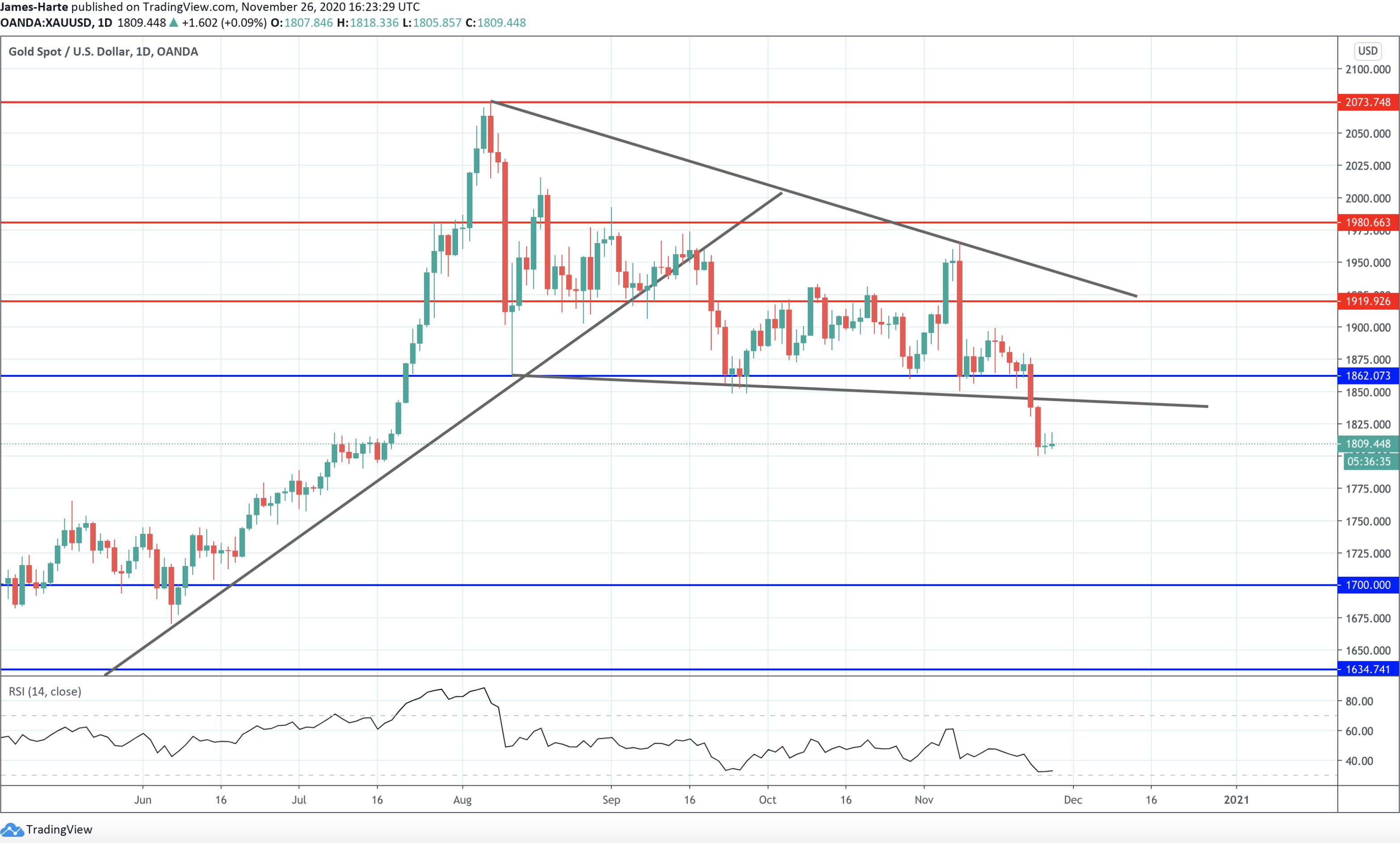 The sell-off in gold prices this week has seen the market breaking down below the key 1862.07 level and below the supporting trend line of the falling wedge structure. With this level breaking, the view has shifted in the near term, with risks of further losses elevated. The next key support region to watch is down at 1700, with 1634 below it.

Silver prices have traded much in the same fashion as gold prices this week though the downside has not been anywhere near as amplified.

While silver has been under pressure from the downside flows in gold, the continued strength in equities markets has helped offset this weakness. Furthermore, a slew of better than expected manufacturing data from the US, UK, and Eurozone shoed further strength in November, despite expectations of a contraction. 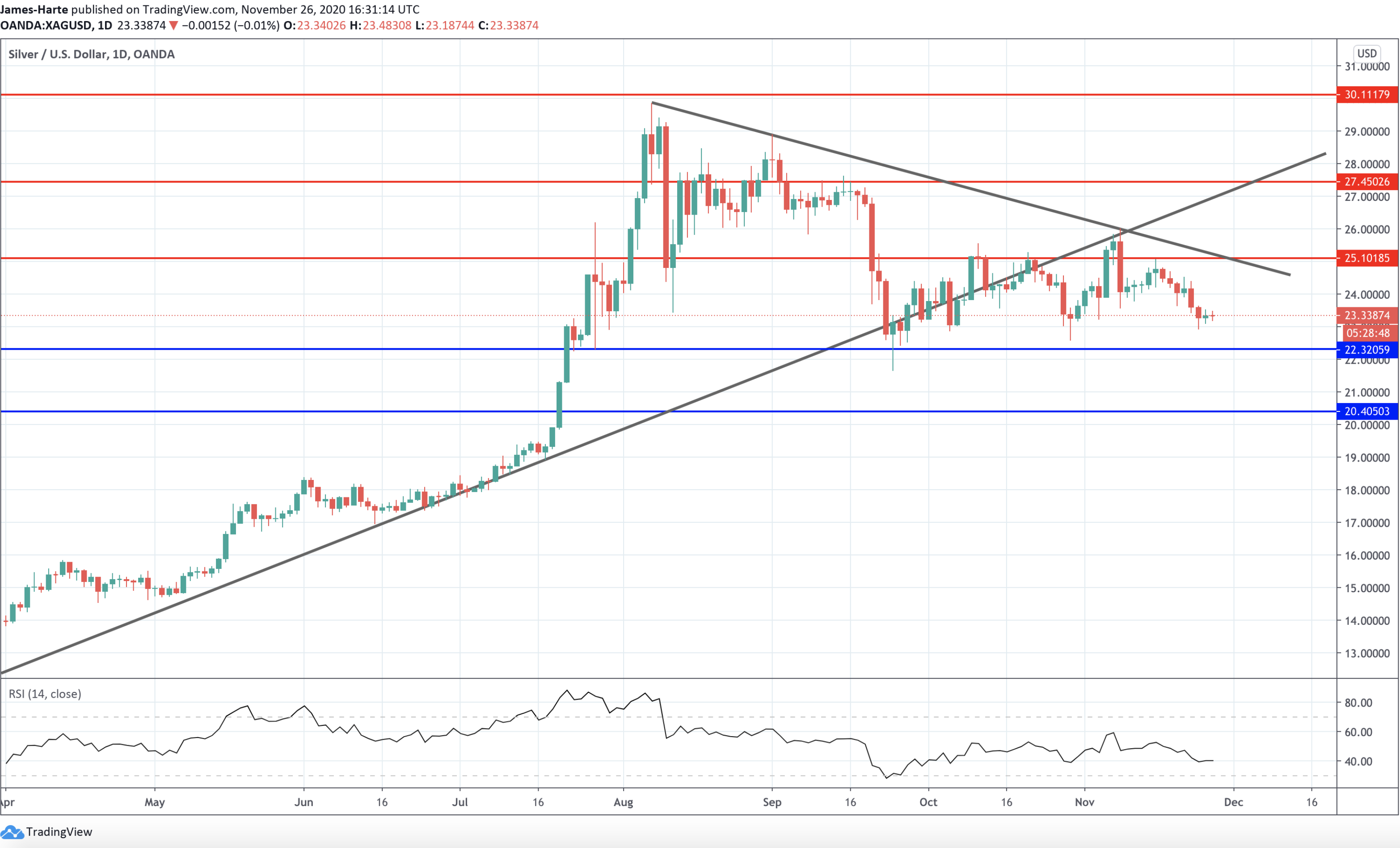 Silver prices continue to trade the range between the 22.3205 level support and 25.1018 level resistance. Despite failing at the crossover point of the bullish and bearish trend lines, silver has yet to break down. While above the 22.3205 level, another move higher is still a viable view.