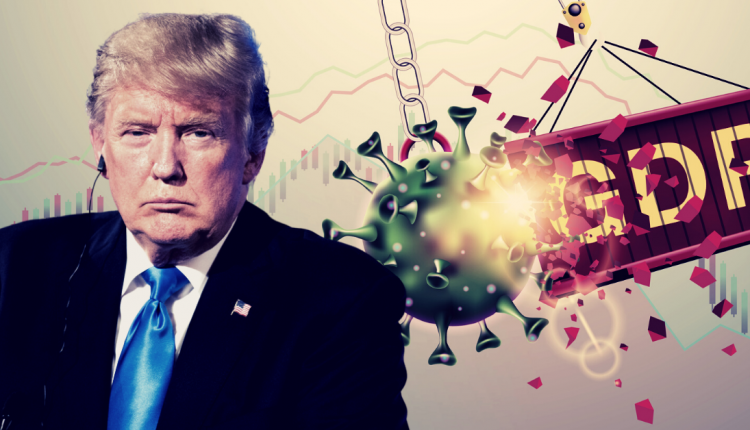 Tomorrow we get the final chance to adjust the measurement of the US Q1 GDP.

The broad consensus is that it will simply repeat the second reading, to confirm a -5.0% contraction. However, given the logistics issues around COVID, there is a higher chance than usual for a change this time around.

The markets have already priced in a recession, and are looking towards reopening.

A further adjustment to the downside (it’s very, very unlikely to be adjusted back up), might just be the catalyst needed to push markets down.

While risk sentiment has been improving, recent trends show that the bulls are quite fickle and unsure.

We’re coming to the close of the second quarter, which is less than a week away.

If the first was bad, the second is broadly expected to be much worse, since that’s when the bulk of the shutdowns happened. Starting next Wednesday, we get the first measures of the quarter. And this is likely to set the tone for markets.

With the recent rebound in equities sputtering out, fear of a W-shaped recovery is starting to return.

After taking a hiatus in early June, COVID is once again the most common subject in the media.

Regardless of the political implications and explanations, the relatively slight uptick in cases compared to the large increase in coverage has made investors a little more nervous.

There’s something else to keep traders up at night.

As the COVID situation at least stabilizes, geopolitics has come back on the radar. Many strategists are pointing to recent activity in China as a potential sign that the Asian giant is seeing an opportunity with the US distracted by internal issues, to push their interests.

Taiwan has repeatedly warned off Chinese fighter planes, recently, in a noticeable increase in tensions. And then there was the border clash between China and India.

What worries the markets the most, however, is best illustrated by what happened on Monday night.

US Trade Rep Peter Navarro replied to a reporter’s question in a way that allowed the journalist to report that the official said that the US-China trade deal was over. This sent markets reeling until President Trump had to come out to clarify that the trade deal was still on.

With Washington and Beijing escalating the war of words, it shows how sensitive markets are to potential negative news. This underscores the fragility of the recovery so far.

Preliminary reports for June in the form of PMIs have been positive. However, they are just the first month of recovery. It’s still a full month before we get the first reading of US Q2 GDP reading.

And by then we will be in the middle of earnings season.

On a positive note, many companies are seeing the situation stabilized enough to start issuing guidance. Over the next couple of weeks, we can expect major firms to give their expectations for the development of the economy over the rest of the year.

That might be the defining element for whether we are going to see a V or a W in the recovery path.

Are Silver Bulls Ready To Strike?