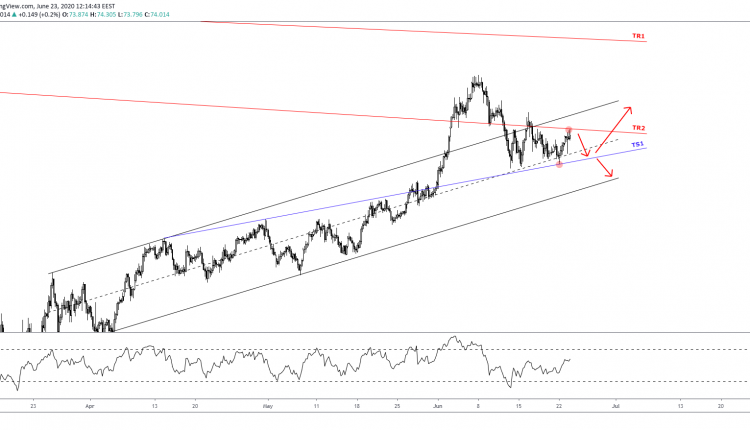 AUDJPY bulls’ attempt to break the TR2 trendline resistance on June 3rd has proven false. The rally was short-lived with bears pushing prices back within the ascending channel beginning in March.

Weakening to the confluence level where the median line and the TS1 support meet, however, increased bullish bets. In case the TR2 resistance gives in to bullish pressures, we could see prices extend to the upper channel. Or even higher towards 78.00 (TR1 resistance).

The shorter-term chart below suggests that bullish momentum is slightly strong. This is evident in the most recent rejection on the median line, which has formed a pin bar.

Despite having seen an upside attempt since, bulls must break the TR2 resistance to make a second attempt towards TR1 possible. This will also need the break of the upper channel which is expected to be around the 75-76 area.

In case prices break below the median line or the TS1 support again, the chances of further weakness will increase. We could then expect the lower channel to come into play.

However, a short decline to either of the said support levels, could also lead to a break of the TR2 trendline. The RSI (14) does signal a potential bearish move, which increases the chances of seeing a slight bearish retracement at least.