Can January payrolls strengthen the USD? 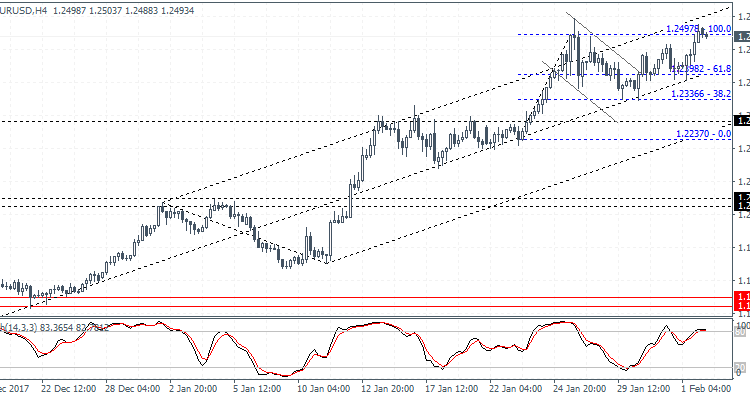 The U.S. dollar continued to remain weak a day after the FOMC meeting saw interest rates being unchanged. Despite a slightly hawkish Fed statement, the dollar remained weaker especially against the euro currency.

In the U.S. the ISM’s manufacturing PMI showed another strong month with the index beating expectations and rising to 59.1 This was however weaker than December’s gain of 59.7.

Looking ahead, the payrolls report for the month of January will be released today which will be major event risk for the currency markets. The U.S. unemployment rate is expected to remain steady at 4.1% while the number of jobs being added during the month is expected to rise 181k, up from December’s 141k. Wage growth is forecast to rise 0.2%, slightly slower than December’s increase of 0.3%.

EURUSD (1.2493): The EURUSD continued to surge higher which followed the technical rebound off the bullish flag breakout level at 1.2398 level. The gains are likely to be short lived as early trading today is showing signs of a reversal near the previous top at 1.2498 – 1.2500 level. A follow through to the downside is required to validate this bias. Support at the 1.2398 level will of course once again be crucial. A break down below this level is required in order to validate the downside bias. Lower targets come in at 1.2281 followed by 1.2090 levels.

5 differences between trading stocks and Forex